Deep breath. So yesterday I was on a rampage, but today was a nice reset and a much more chill day. The world is still just as messed up, but sometimes you have to turn it off the best you can. So I did. Earlier this week I mentioned I spiderwebbed my phone screen and today my insurance (Asurion with AT&T) sent out a technician who fixed my phone in his van for a $29 deductible. We pay a lot for the insurance but was super impressed with the service and the guy was so nice and professional.
As I'd said in yesterday's meltdown, we didn't plan on going anywhere this weekend, but after watching too much TV, Darren and Nova nudged me to do Safari Park. It was slightly more crowded than it has been the past few visits when we do the end of the day from about 5 to 8pm, but I think the anti-maskers just aren't showing up anymore, so even though there were more people, they're all pretty respectful about masks and distance, and I noticed even if people have drinks or food, they're masking between drinks/bites if they're doing it while walking around. And both the cheetah baby and one of the lion females came right up to me at their windows. We'll probably return on Sunday.
After Safari Park closed, we decided to try to catch Comet Neowise, so we wandered. Instead of going west on San Pasqual, we went east toward Ramona and kinda just cruised around until we could find a good elevated and dark spot which was a deadend somewhere off a road called Highland Valley Road, and though I hadn't even brought my tripod, we were able to see the comet with binoculars and eventually the naked eye once we knew what we were looking for. To be honest, just being out there so remote and seeing the stars was pretty nice.
That led to a nice music-filled drive home and all of us content with our day. Darren's now playing music, Nova is asleep, and I'm catching up on Housewives and finishing this update. And we're maybe getting our ants under control with our Terro traps so gotta find the bright side, sometimes. 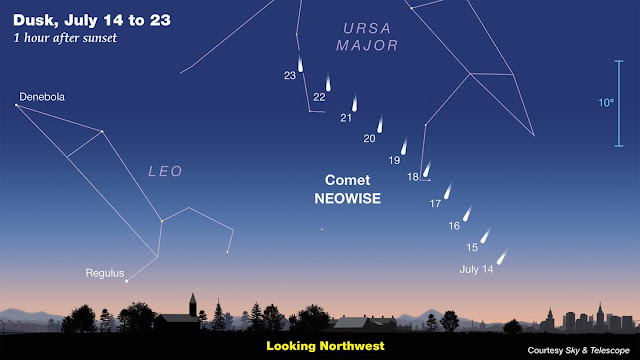