Polysics "We Ate The Machine" 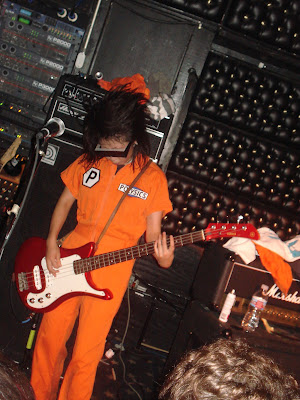 It's really not my style to review albums, but I'm listening to Polysics latest album, We Ate The Machine, and I'm heading to their show at the Casbah tonight and I thought they deserved the added push, especially since they're playing with Black Gold (see Petro's interview here.

Anyway, I was trying to think about what to write about this album because it is not anything I would normally listen to. It's not mopey and introspective and thought provoking and deep. But it is awesome. Remember that lame saying people used in high school when they thought they were so clever- "Party in your pants and everyone's coming"? That's exactly how this album sounds. It's fun and light while also rocking hard and kicking ass. Thinking back to the last show, maybe I don't need to give the push because that show was sold out and the crowd clearly knew what they were in for. On this album, I'm a fan of "DNA Junction", if only because I'm wondering WTF that means, and the album opener "Moog is Love". By the way, the album is released on MySpace records, so maybe everyone's first friend, Tom, will be there to rock out with all of us.

BTW, congrats to Jamie for winning the tickets to the Casbah tonight and to Johnathan who nabbed the Conor tickets.