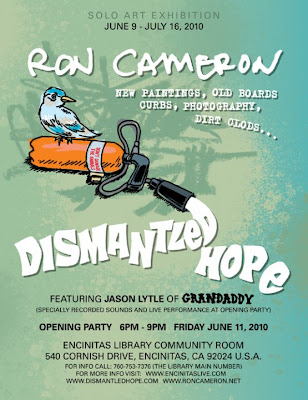 O asked that I share the following information with you. If reading the whole thing is too much, the short version is that Ron Cameron has an art exhibition called "Dismantled Hope", accompanied by music by Jason Lytle of Grandaddy. Jason will also be performing a solo set at the opening Friday night at the Encinitas Library.

Ron Cameron has been working feverishly behind the scenes of the youth culture market since 1986; creating some of the most memorable and iconic images that have helped shape today’s boardsports lifestyle. Envisioning the identity, philosophy, and art direction for skateboard companies, music events and clothing brands such as: Blockhead Skateboards, Acme Skateboards, Warped Tour, and RVCA Clothing. Ron has consistently brought color and attitude to the unsuspecting outside world, while keeping a similar thread of a central vision throughout all of his projects. Ron has also created artwork for other respected skateboard brands such as: H-Street, Vision, World Industries, Foundation, Toy Machine, and Krooked. International magazines: TransWorld Skateboarding, Big Brother, and Heckler. Clothing brands: Etnies Shoes, Nike SB Shoes, and 24-7. Bands: Plastikman, Buck-O-Nine, Big Drill Car, and The Mummies; and events: ESPN X-Games.

"Ron Cameron is one of the most prolific artists to have worked in skateboarding over the past 20+ years..." - SLAP Magazine 2009

Jason Lytle (who is creating the soundtrack for the art show) was the mastermind and frontman of the groundbreaking and creatively emotional band Grandaddy in the mid-1990s through the mid-2000s. Now working primarily as a solo artist he continues to create lush and thought-provoking music for movie soundtracks, car commercials, and other various projects around the world.

Ron and Jason have come together to collaborate on this art show for multiple sane reasons such as; they were both sponsored by the same skateboard company (Blockhead) in the late 1980s and shared similar artistic influences during this time; they both grew up in the Central Valley area of California (Ron in Sacramento and Jason in Modesto); and both received the exact same plastic skateboard model (GrenTek 'Spoiler') as Christmas gifts in 1976! Most importantly: they remained friends and continue to skate together often discussing their shared artistic vision of a world gone wrong in a beautiful way. Jason will be creating special songs and ambient sounds that will be played in the background and in headphones during this art show, and he will also be performing a live set at the Opening Event on June 11.

This show will be held at the Encinitas Library, Community Room for six weeks, opening Wednesday June 9 and running through July 15, 2010. The official Opening Event will take place Friday, June 11, 2010. Not the typical art gallery space, the main room is pretty good size at 2,000 square feet, and receives foot traffic of 1,200 visitors per day.