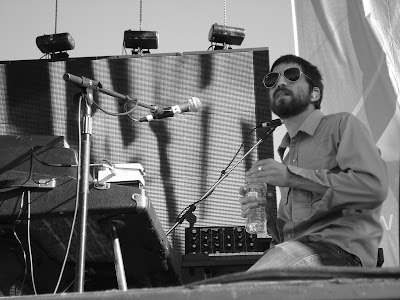 Some newsy stuff worth mentioning over the past couple weeks, so here's what I've got. Nothing breaking, but still pertinent if you care about music in San Diego.

At their recent sold-out show at Birch North Park Theatre, The Album Leaf played their last show with the lineup that was consistent over the past 8 years, with Drew Andrews and others venturing off to their own projects. The band performed as a four-piece with Jimmy Lavalle, Matt Resovich, Brad Hall, and drummer James McAllister (who also plays with Sufjan Stevens) at the Memorial Day weekend Lightning In A Bottle Festival in Irvine, billed as headliners. According to the band's twitter account, The Album Leaf will be announcing dates in Australia soon.

Seth Combs gave his final fuck-you to the San Diego Reader when he told writer Chad Deal that he was moving to Maryland to be a farmer. (Sorry, Chad, he gotcha on that one.) His cohorts backed his story when it was fact-checked, and the gossip-hound was left once again confirming a story that had no factual merit. The Reader also used a photo of Seth without permission and without crediting the photog, but even funnier is that you can see Seth's face pre-Scene Wolf.

Last week, new CityBeat music editor Peter Holslin broke the news that the Radio Room was in the process of being sold to Hamilton's/Small Bar owner Scot Blair. Murmurs abound that the new spot will be call 11 (as in "this amp goes to eleven")and will have music 4 nights a week. Scot, I want to work for you. Let's talk.

Local musician Kenseth Thibideau has been known for his impact on the scene with Pinback, Three Mile Pilot, and Sleeping People (among many other projects), is releasing a solo record caled Repetition, being released by Temporary Residence Ltd out on July 20th. You can download the first track, "Black Hole", here. (right click to save)
Wavves, aka Nathan Williams, will be releasing a single via Mountain Dew's Green Label Sound called "Post Acid", followed by a full LP, King of the Beach, on August 3. Read more here.
Posted by Rosemary Bystrak at Friday, June 04, 2010