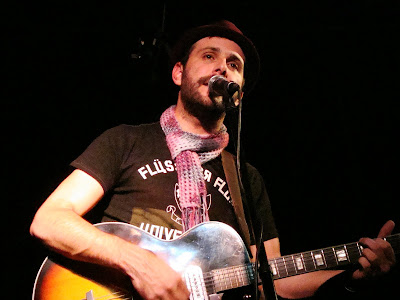 Greg Laswell has been an integral part of the independent music scene in San Diego for many years. Earning his chops by playing in small bars and clubs was the way for him to gain an audience while learning his profession. Since going out on his own, Greg has recently released his fourth LP, Take A Bow. While listening to his music, it becomes apparent how emotionally charged his songs are and always have been. Greg has started a new chapter in his personal life with a recent move to Brooklyn. This is reflected in his songwriting and shows an artist really hitting his stride. It is easy to take things for granted, since Greg plays live music in San Diego on a regular basis. Now that he is based on the East Coast, there is no telling how frequent his future visits will be. Fortunately for local fans, Mr. Laswell will be performing at the beautiful Anthology supper club this Friday. Here is as opportunity to listen to songs from his newest effort (cd release show), as well as songs from his previous albums. This promises to be be a special evening and a wonderful way to start the weekend.

Watch a video of Take Everything below.

Greg Laswell "Take Everything" from Vanguard Records on Vimeo.