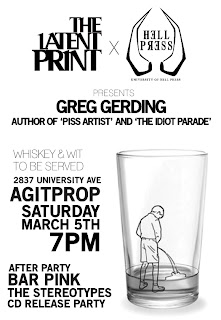 You've heard the Bukowski comparisons. Yes, local poet Greg Gerding combined drinking and writing and women and music. His work can and has been dropped into the autobiographical, memoir, stream-of-consciousness slot and yes, his poetry/prose are laid in mostly lay, working-class terms. But wait, almost mid-sentence here, Gerding sobers up, straightens his posture and comes fierce in this rare "double album" book release.
Both Piss Artist and The Idiot Parade take a reader down the fast lane of the Gerding binge-boozing expressway and then, on pg. 217 of ...Parade, in a piece titled "On quitting Alcohol," slam on the brakes, do a 180, and stare-down the threat and danger of opposing traffic, stone sober. Missing is the light and languid beat of a rock musician just out of rehab. And Gerding confirms he cleaned up with out that or AA. The tone is stark clean, ominous at times, "I seem to be on the other side of life traveling rapidly at the speed of death," he pens in the latter poem. What's more, the raging stomp of the drunk is somehow louder, albeit more morbid "There used to be a time when I felt things, now all I'm aware of is the stone in my chest" in the same piece.

This can be a divisive subject, sobriety. But I don't think that it matters much to our readers what an artist does to gain inspiration, sober or not, right? Why did people hang by every word Jim Morrison wrote and sang? Why did the hardcore kids idol-worship Ian McKay(godfather of straight-edge)? Both were trailblazers in their own right. Gerding, in these two volumes,. machetes paths through to ends of both those jungles and with that come all the scrapes, tangles and trips that are incident to a creative life advancing on it's own personal safari we call living.

"I do think I am a little bit angrier when I write, and I think that brings even more edge to my work than before," says Gerding in an e-mail.

What would Bukowski have read like had he abandoned the bottle in his prime? Come to the reading this Saturday, March 5th at the Agitprop space and see if wouldn't sound something like this:

This city is large one. And the distance between my house and work is long. It measures the length of one immense prison. I'm so bound by the constraints of time and distance that I can taste despair on the tip of my tongue. My mind is too aware of the absurdity of this retarded routine...
Excerpted from the namesake poem on The Idiot Parade
Posted by abraham nunez at Thursday, March 03, 2011