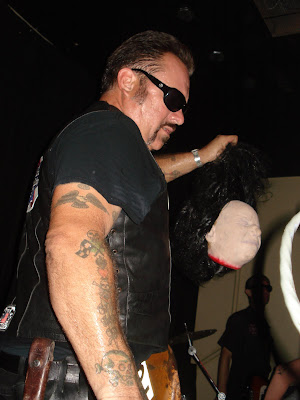 "The Scariest Band In The World" is playing to back to back nights, and my good friends over at Eleven have given me tickets to get you in free. I've got one pair for each night, and since my email is FLOODED right now with SXSW stuff, just leave a comment with your full name and which show you would like to attend (or if you're available for both), and I'll pick a winner for each night using random.org.

Check out the event on Facebook and if you want to secure your spot, you buy tickets online.

First Night: DEADBOLT
DEAD ENGINES
BARRIO TIGER
9PM
$10
What else can San Diego want but two nights of "The Scariest Band In The World" playing two nights in a row! Deadbolt takes it to Eleven. It's a night of Hell raising, Beer Drinking and the greatest show on earth part 1. We arent talking about Ringling Bros Circus either... Supporting this great band is Dead Engines and Los Angeles' Barrio Tiger.

Second Night: DEADBOLT
BEHIND THE WAGON
BOURBON SAINTS
9PM
$10
Part 2 of "The Scariest Band In The World." Deadbolt returns to Eleven for another night of Raising the Devil from his slumber. Drinks will be flowing like the Colorado River and the Party wont stop till we call out Last Call! Two Chords in Two Nights!
Posted by Rosemary Bystrak at Wednesday, March 09, 2011

Yes I'd love 2 to the 2nd night please - thank you!
Angela Barra