SXSW: It's Not About The Destination (Not yet, Anyway) 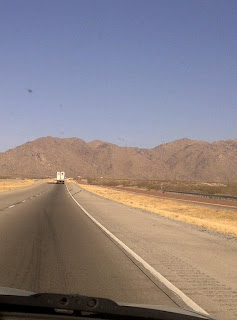 For as long as I've known about SXSW, I've wanted to make the trek to Austin, Texas. Though I never really had the time or the means (still don't, really), more than anything I don't think I really had the cojones to make the decision to go and follow through with the plan to get there.

The first major lesson I'm learning is rigidity gets you nowhere. I had planned on a two person trip, and when I found out there were three of us, I was worried about the lodging accommodations I'd worked out with my friends, but I was now also the third wheel. I'm a spoiled brat, quite often actually. I like things to go how I plan them in my head. I don't like change. I don't like detours. I like sitting shotgun, planning the music playlist, being navigator. I hope that since Sunday I am less of a bitch about all of these things.

Me, Nima, and Dani left late Sunday, arriving in Tucson pretty late. As I mentioned, a friend of mine is working there for the month and has a hotel suite for the duration, so he let us bust out our sleeping bags and crash for the night.

The next morning everyone slept in, but I had some posting to do, so I found Savaya across the street, a cute little organic coffee shop with free wi-fi and enjoyed the best coffee I've had in a while. When I was done working, I went back to the hotel and eventually we all got showered and hit the road on to El Paso.

I mostly slept on the ride and was pretty much over it, sleeping with my earplugs in because I was dodging the music selections. Who has Hootie on their iPod!? I woke up in New Mexico and we were heading to White Sand National Park (see above about detours). After a google search, I gently nudged them to turn around and go to El Paso. The park closes at sunset, it was 6:30, and we were still 40 miles away.

We arrived at Ruben's sometime around 9 or 10...we were still confused by daylight savings + time zone changes. Ruben had some friends over. They were drinking cans of Budweiser out of the garage as two of their daughters watched TV inside. They brought over some pizzas and I have to say I wasn't shy about scarfing 2 slices. Nima and Dani went to find vegan food; I stayed and hung out with the boys who were absolutely hilarious in their El Paso wisdoms (see last night's tweets). Food, beer, and good laughs and I was just about over the funk I'd been in all day.

Today we had a slow start. I decided to take advantage of Ruben's wi-fi and submit the whole week's worth of listings for SoundDiego. Then we stopped at Monica's Cafe, a tasty little Mexican spot despite the supersmall burritos and the stinginess with the salsa. Finally on the road around 1, we stopped a little while later for some gas and ran into The Fling at the station, chatted, and I guess we'll see them hanging out tomorrow when Writer plays the SD Citybeat showcase.

Well, that is if we ever get to Austin. See? This is where I shed my rigidity. As we're driving we start hearing a thumping in the car...we pull off to inspect the car. Nima is a pretty skilled mechanic, so he thinks he's figured out the problem...but we don't have 90 weight oil and we need an unusually large allen key to add fluid to the differential (as if I know what I'm talking about right now.)

The merchant at the Chipotle Spice Outlet in Fort Hancock, Texas says the mechanic next door should be at his shop but he's probably at lunch so we should wait. After about half an hour, Nima sends me to the Fort Hancock Sheriff's Office across the street to ask what they know about the mechanic. After I shoot the shit with Officers Fernie & Freddy, they offer to escort us down the road to a local guy with tools. We're less than 2 miles from the border, and most of the homes in the area are scattered and several have garages for dealing with farm equipment and such. Freddy helps translate for Nima, but they didn't have what we need, so we went to Jaime, a mechanic who has his number posted off the freeway. We navigate through nameless streets, pulling into his yard as the car gets circled by a pack of dogs. A young girl comes out, tells us to pull around back. Jaime doesn't have the tools either, but sells us some oil and tells us 2 other "shops" we might try.

On our way, I spy a barn covering, tools, machinery, and a group of men hanging out. We pull into the yard, ask if they speak English (yes, they said) and then proceed to try to tell them our problem in Spanish. Without tequila, I get all anxious speaking Spanish then realized they had said yes. These men ranged in age from Middle School to the age of my uncles, we'll say, and for an hour they searched tools, crawled under the car, MacGuyvered tools with a blowtorch. One of them, Danny, a handsome man with his clean denim shirt, fresh indigo Wranglers, and cowboy boots, even drove to the next farm to borrow tools until eventually they got the damn thing open, only to realize the differential wasn't the problem. We still don't know what it is, but it seems to be an issue when the temperature rises. We thanked Danny and the rest of the incredible men who refused to charge us anything. Fort Hancock, Texas will forever hold a special place in my heart, not only for their kindness, but the sheriffs, too. Thank you for defying every stereotype about Texas I've been conditioned to believe.

We set back on the road, periodically pulling over to let things cool a bit. We hit a Customs stop and when the officer asked where we were heading, decided we needed to get drug searched by the canine. No drugs for us, guys, just bathtubs full of booze, thanks. Nothing much more to report. We met Said The Whale at a stop and when Nima told them I'm a writer, they gave us a CD and it is REALLY good, so we'll go out of our way to find them at south by.

We will get there, Austin, we just don't know when.


Sent via BlackBerry by AT&T