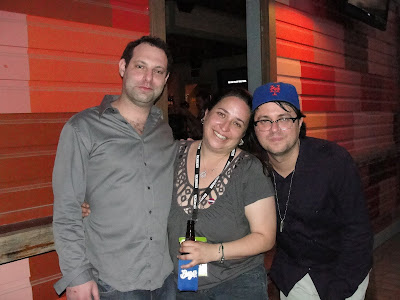 So I was really gonna stay offline today, but I just got a press release about Breaking Laces and it's kinda funny. Billy and Seth of Breaking Laces were the guys I hung out with on Friday at Bar 96 in Austin. Seth wasn't doing well when we met. Apparently he'd fallen and hurt his wrists. I was sure at least one was broken judging by the swelling. He sat with me and asked me to text his friends from his phone to let them know he was ok. He even asked me to call his mom, but I wasn't about to freak out the family of a stranger. Later that night I helped them get a cab, which we shared when they dropped me at the Bright Eyes show, though the line was around the block so I ended up just walking back to 6th.
They asked if I was gonna blog about them to which I responded, "I dunno. I mean, it would be incredibly awkward if you sucked." Fortunately they don't. Willem's vocals are compared to Ben Gibbard's and their record, When You Find Out, is hook-laden without being hokey. Some of the poppier songs remind me of Sumack, which was easily one of my favorite bands in my twenties. I didn't realize when they told me they only had three records on them that I was getting an advance that doesn't come out until May, so in retrospect, I feel pretty special.

After listening to the record more than a few times, I feel like there are two distinct and separate personalities. There's the catchy simplicity of "When Your Find Out" and "Shopping For One" that remind you of hand holding and sweet relationship beginnings, while songs like "Bone Dry" or "What We Need" hit the complexities of deeper relationships. One of my favorites is "Laser Beams" and it could almost be about SXSW. "The pain rains out of me/I hurt my head on laser beams/The pain rains outta me/and I'm so scared I can't believe"
I love this record and think you will, too. Seth needs some time to heal before they hit some east coast dates, but you better believe that when they come to California I will be all over it.
Here's the full press release:

Brooklyn-based rock trio Breaking Laces headed down to Austin to play four SXSW showcases, meet people, make connections, drink beer, catch some shows and head home to get ready for the release of their highly anticipated upcoming release, When You Find Out. But things didn't go exactly as planned....

While the band did play all four gigs, the last two were quite an accomplishment - band drummer, Seth Masarsky, hit the kit with two broken wrists! Such devotion to rocking out regardless of injury, earned Seth and the band the official True Grit Award from The U.N.C.L.E. SXSW 2011 Spirit Awards.

Breaking Laces' songwriter and lead singer, Willem Hartong tells the tale: "The first rule of Austin Fight Club is that we don't talk about the fact that Seth found his way into a basement Friday night and got Tyler Durdened. Sounds a lot better than, don't drink while walking, right? No matter the story, fact is we can now honestly say we live up to our name, Breaking Laces. It's a true accomplishment."

Breaking Laces upcoming release, When You Find Out, is stockpiled with Hartong's smart, witty, humorous and honest songs ranging from pop ditties to distortion-influenced rock. The 12-song album, set for May 17 release, consolidates and focuses the salient qualities of the band's prior work, while venturing into some exciting new musical territory with instantly memorable tunes such as "What We Need," "Here to Stay," "Laser Beams" and "Carry On."

It's good to know that they have more than one fan here in Cali. I have been waiting patiently for them to make it out to the West Coast for the last 5 or 6 years, ever since I stumbled upon them looking for a song I thought was called "light up for me". Willem wrote that song for a Showtime special about 9/11 and it is one of the most hauntingly beautiful songs I have ever heard. It was released on their album, "Socahtoa". You shold give the album a listen as it is one that shouldn't be missed.