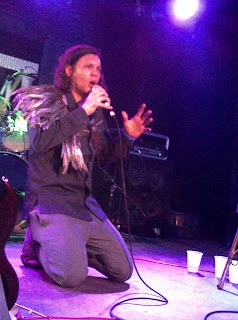 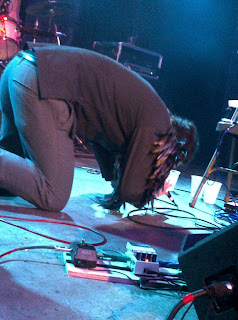 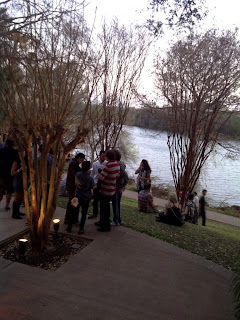 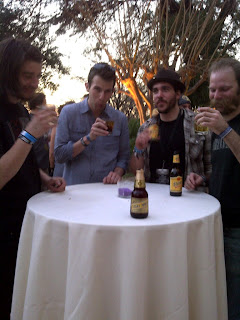 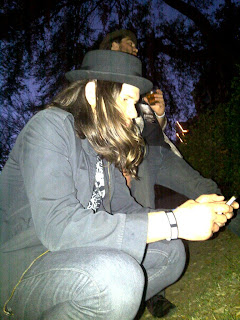 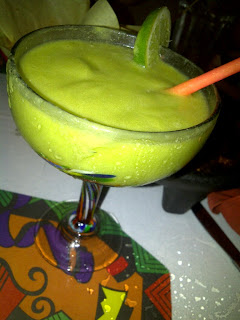 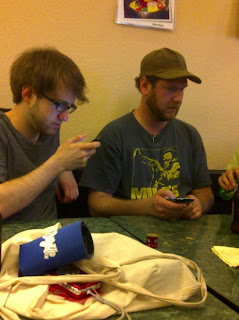 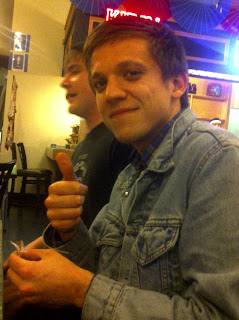 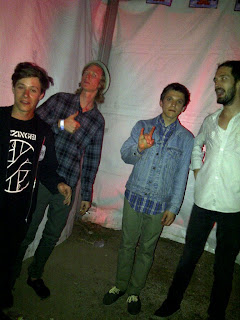 I'm not sure if these photos posted yet, so just in case, here are some pics from Friday. I'm sitting in the back of Dynamite Walls' van on our drive home from Texas. We're listening to Transfer and hoping to grab from Tucson. We have now been driving about 15 hours. We cut out a day early so I didn't do a bunch of things I'd wanted, but overall it was a great trip so let's see what I can remember.

Friday morning I woke up to a text from Steve, which is when I made the crazy hike to Annie's West. He was awesome, and I stuck around to catch Colour Revolt (awesome- should tour with Republic of Letters) and White Sea, which is Ray Suen's latest project with Morgan from M80. I hopped in a cab since I was late for Dynamite Walls' set at Rusty Spurs. I had also been trying to link up with my friend Pete McNeal, and it was serendipitous when I saw him walk in after DW's set. He was playing with another friend, AM, so it was pretty cool that they linked up. I also noticed Adam Duritz of Counting Crows. I'll get back to that later.

From Rusty Spurs, I hopped in a pedi cab to Bar 96 to see Matt Haeck play. There was a pretty cool lineup there, so I ended up hanging there for a while, also catching Grampa Drew and The Romany Rye among others. I met a couple guys from a band called Breaking Laces from Brooklyn and ended up hanging with them for a bit until I walked them to the Four Seasons to grab a cab.

They dropped me at the Opera House where at least 300 people were in line. I love Bright Eyes, but I'd rather go someplace I can actually get in without a line, so I hoofed back to 6th and decided to wander. I ended up at Latitude 30 for another British Embassy showcase. Pyles came to meet me and we loved this band called Little Comets.
We left to see The Joy Formidable at Buffalo Billiards, this cool spot with the stage up on the third floor. The line was pretty insane there, but Pyles found some friends who got us in. It was fun hanging with Capone from 91X, Lisa from KROQ, Kevin Hellman, Dead Air Dave and Marc from U.N.K.L.E. Fun times. The Joy Formidable were cool enough but it was more about hanging with cool people for me.

I saw Adam Duritz at the table over from us, so I finally thought of something to say to him other than "I tweet at you all the time" but he was in the middle of a long winded conversation, and he looked at me in a "save me" kinda way as he incorporated me into a discussion about Pandora and the Music Genome Project. I asked about Rusty Spurs and he said he was hosting a showcase there on Saturday. He gave me a chocolate cupcake and I rejoined my friends. I heart Adam Duritz. Always have.

I'm pretty sure that was the end of my night, hanging on the balcony and stuff, though somehow I found some drunk guy along 6th and walked him toward home, which was near where I was staying, as he projectile vomited over the bridge into the river. Oh, Austin, how I love thee.
Sent via BlackBerry by AT&T