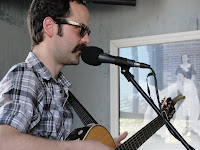 When I found out that I qualified for a press badge to SXSW, I hadn't made any real arrangements. I had an idea how I was getting there and back, but I knew that a hotel just wasn't in my budget. So when I tweeted about it and got a response from Matt Haeck, I was surprised that he'd moved to Austin in the first place (since I thought he was still in Nashville) and thrilled that I'd get to see him.

We met briefly when he was still in San Diego and I was quickly a fan of his music, but mostly we've kept in touch via twitter and facebook. He was incredibly kind and gracious to not just host me, but my two travel companions as well, and we had a great time in Austin in large part because Matt showed us the ropes. One late night, after drunkenly stumbling home and still not wanting to sleep, I convinced Matt to bust out his guitar to play a little session for me in the quad of his apartment complex. It was nearly 4 am and so the video is really dark, but personally I just think it was the perfect capture of a perfect night. Click the right or left arrows to click to the next video.