We had a nice little walk with the dog at the San Diego River Garden. We got there a little later than planned but I had held us up finishing that last post. I wasn't done getting out everything I wanted to say and I hadn't even finished reading my email for the day, so I thought I'd slide a second post in, especially since Casbah got such favorable coverage from NBC and I'm spending Friday night catching up on media briefings from the Governor and Jen Psaki and all the other news. Let me tell you, my Friday is a rager fer sure.
I'm gonna wrap it up though. I did try to break out the California tier stuff and found the pdf with the sector guidance by tiers. It is hard to find. I don't really know how to navigate to it, just that I found the update. I included the direct link and the pdf converted to jpegs below. I was kinda excited that the California guidance includes different occupancies for a general crowd vs a vaccinated or tested-within-two days crowd, meaning it is something the clubs and venues will be able to mandate, though I also suspect with Casbah not planning on live music in the immediate future, the guidance will likely change by then anyway. Still, good looking out as far as I'm concerned. Also, for people who live in California but never bothered updating your Michigan or Arizona or license from wherever...you may wanna do that since a ton of the open or opening sectors are only open to in-state residents.
I hope everyone has a lovely weekend. The weather is supposed to be perfect and Saturday there's a fun "Pedal With Your Peeps" event. Of course Sunday is easter, but it is also my parents' 51st Anniversary and we're so looking forward to an outdoor backyard brunch. Stay safe out there however you may celebrate.

I've been tinkering with numbers again. What happened is I found that California has expanded their vaccine dashboard to break down doses by quartile. I didn't notice when this change happened but I bugged CDPH, the Governor's Office, and CalOES on Twitter to share this information, so I'm glad it's finally there. 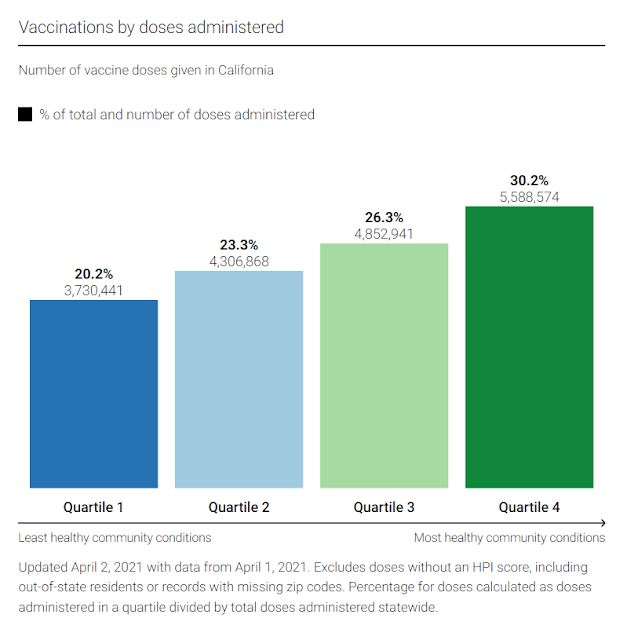 On Thursday, Nathan Fletcher said that the state was around 3.4 million doses administered to Quartile 1. I don't really think we jumped 300k doses in that Quartile in one day, though I suppose those were morning numbers and 150k per day for yesterday and today is feasible, especially with all the pop-up vaccination sites happening. Based on this graph, today the state is at 3,730,441 doses. I went back and looked at California's overall doses delivered and administered. I added those all up and over the past 8 days, the state has averaged 360,374 doses per day. We're also hearing that deliveries will increase by 25% next week, but just based on the current pace, if 20.2% doses are going to Quartile 1, that would be 72,800 a day. We need 270,000 more to hit 4 million to move San Diego into the Orange Tier as the metrics will shift.

Let's assume today got those 72,800. That's about 200,000 more shots in that quartile we need. Sooooo that means that COULD potentially happen in 3 days...Saturday, Sunday, Monday. Though Easter may throw a wrench in there. But *fingers crossed* we could be in the Orange Tier by Tuesday!! And that doesn't mean I'm running out to travel or push for shows or anything like that, but it does mean that San Diego has been consistent with our case rate, our declining hospitalizations and ICU rate, and maybe, MAYBE, I don't have to freak out so much about Nova going back to school and bringing home the cooties. Her school is doing mandatory testing before they return, and Darren gets his second dose on Monday, so I'm feeling a little more assured, though I would've very well just let them sort out air purifiers and ventilation and procedures and have them all start with a clean slate in the fall. But I literally took no part in her online education, didn't have to juggle with work, and didn't have multiple kids online, so I get why parents are just over it.

Here's the California Vaccine Distribution +Change From Prior Day Administered:

I also kinda wanted to pick apart the guidance for venues, conventions, and gatherings that I included on the last post, but I think I'll wait until we're actually in the Orange Tier to break down what it all means, because for example, the Casbah operating as a restaurant with DJ's in the current tier can operate at 25% but as a venue with no food service, only 15%. And it all changes whether Casbah chooses to mandate vaccines or a negative test within 2 days of an event or not. Tim said he's waiting on shows until late summer and I am just fine if he maintains that pledge.
This also had me really thinking about if and when I start listings again, but right now it feels like musicians are playing non-conventional places that never hosted music before and the places that traditionally hosted music are holding on until they can open at full capacities because they can't survive at the lower numbers. Plus there's a whole thing about designated eating and drinking areas and it's just so complicated. If YOU feel comfortable going out into the world, there is live music happening, I'm just going to wait it out a little longer.
I swear, this Industry and Business Guidance/Dimmer document is so hard to find, I always have to do some deep search and still don't know where it originates, but it, too has been updated. Here are jpeg versions of the pdf. 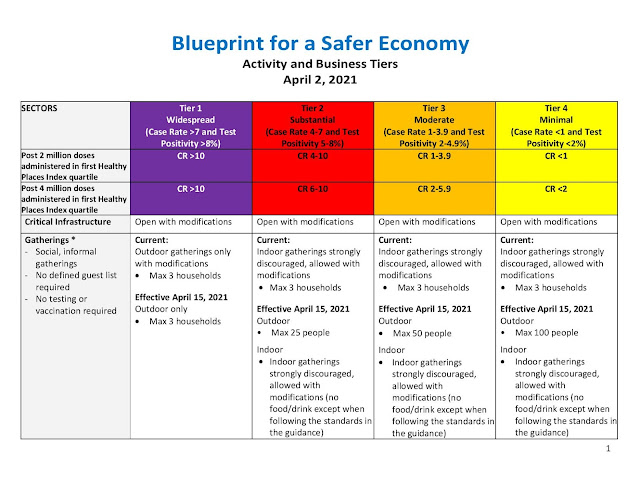 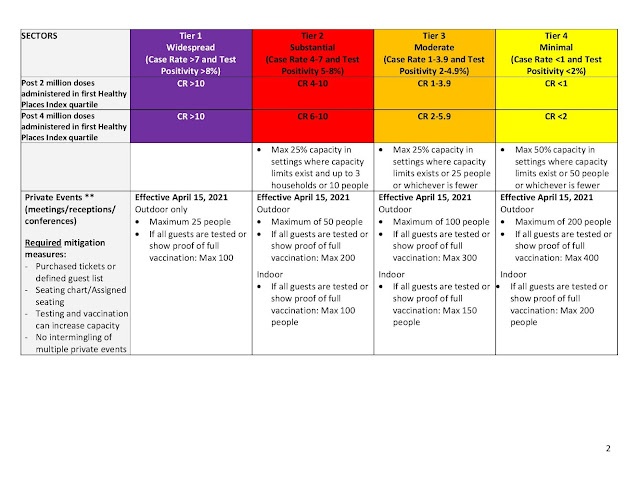 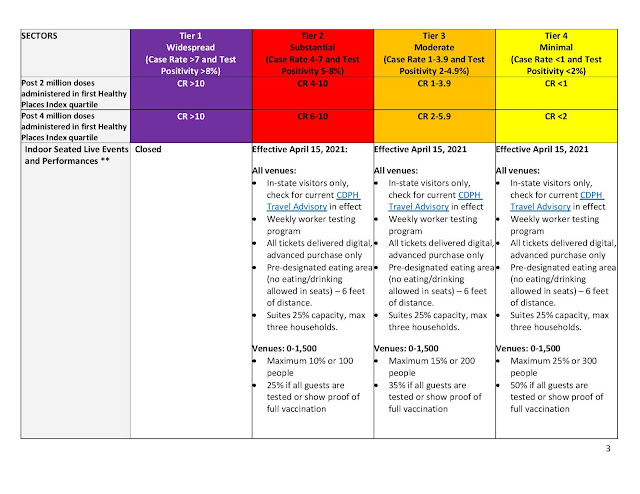 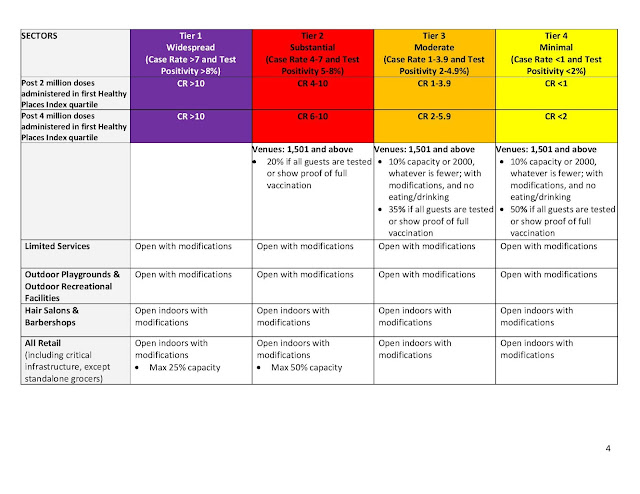 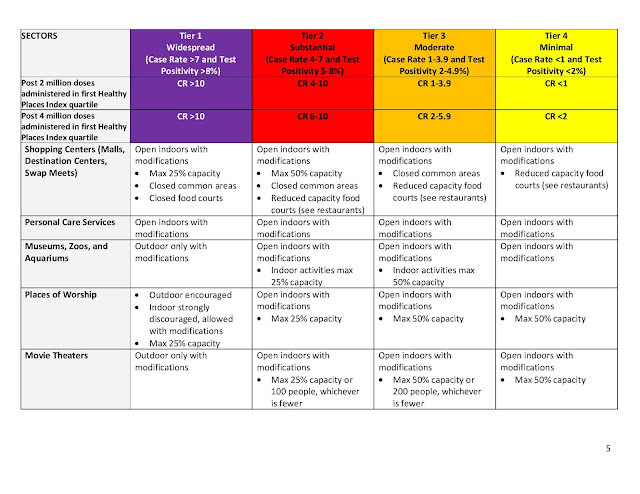 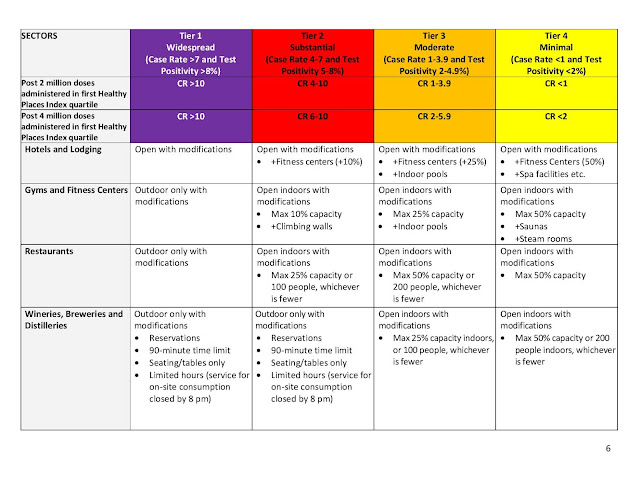 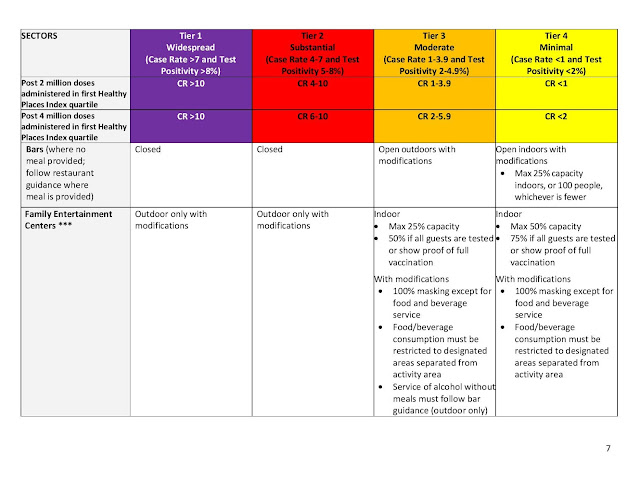 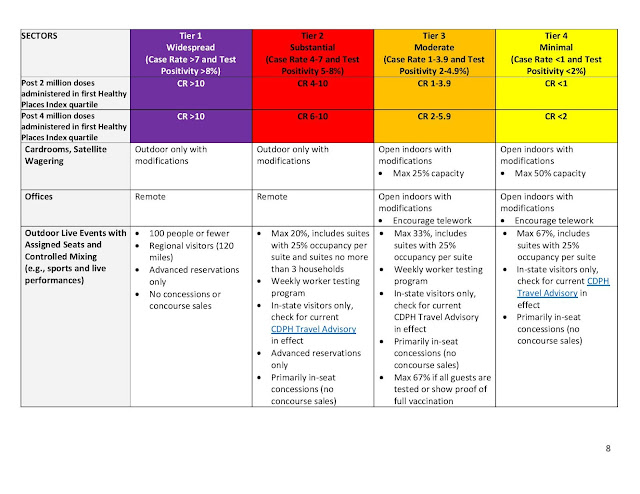 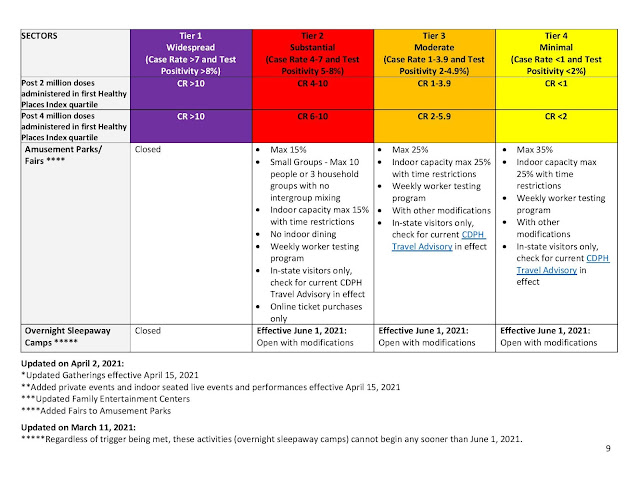