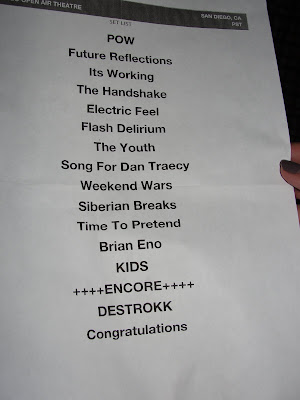 Did I ever blog about the time I tucked Andrew VanWyngarden into bed? I wanna say it was after MGMT had played at X-Fest. Or Street Scene? I'm not really sure. But the first time they played in San Diego, opening for Yeasayer, I met them at the Casbah and had invited them to an after party. They never came, but they called to thank me for the offer, so now I had this phone number on my cell, and after some texting, Abraham and I were picking up whiskey and beer and heading to the Town & Country. The phone number didn't even belong to anyone in the band, it was their friend who toured with them in the early days, I think. We hung out at the room, chatted for a little while, then they were tired so I tucked Andrew into his hotel bed and we left. This is why when we saw Andrew at the Fairey wall, I gave him a huge hug, though I'm still convinced he had no memory of having ever met me and must've thought I was a crazy person.

I tell you all of this because it is always awesome as a fan to have a story with the artists. Whether you've attached meaning to a record or had some experience meeting a band, when you've really connected, even in your own head, the concert experience is that musch more amazing. Jeff bought tickets in pre-sale, so we were sitting in the 5th row in the pit area, and while I wasn't impressed at all by the openers, it didn't matter because MGMT were everything I wanted them to be. I had declined a photo pass because of some rule that after 3 songs you have to take your equipment back to your car only to realize my camera would have been excepted from this rule, so bummer there, but I still had a great time. See photos and read more after the jump. 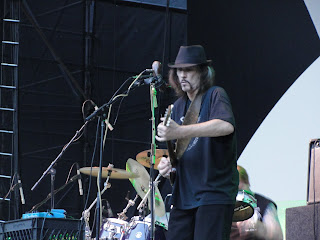 It was kind of a crazy night. while MGMT was playing at the Open Air Theatre, Tool had a sold out show at Viejas Arena so traffic and parking could have been a nightmare. Fortunately we got in and out without any serious traffic, though I live really close to State, so it couldn't really be that bad anyway. The first band was Helios Creed. Not sure if it was the empty facility at 7:30 when they started or what, but they seemed to be the loudest act of the night, and I didn't find them particularly interesting nor annoying. They're just a band that for me didn't have any memorable moments. 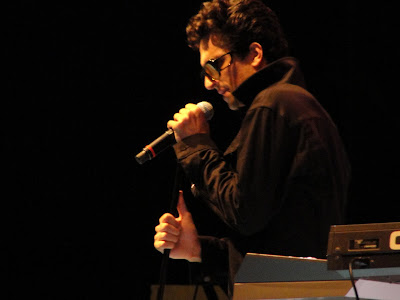 Francis & The Lights, on the other hand, were FULL of memorable moments. Perhaps channelling Prince and John Travolta in Saturday Night Fever, it was hard to take this band serious, and it's hard to know if that is the intention or not. Here's the texting that went on between me and Zack from Sezio:
Z: "I could take you home, but you're already there..."
R: Are you sexting me?
Z: Haha, maybe. Did you just see those dance moves..!!!!?? This is ridiculous. Must be a joke, huh?
R: That was awesome. Too slow with the video. They should play with Fitz.
Z: They should never play again...Wow.
R: I bet he drives a Trans Am.
Z: Totally. And is wearing a pink ladies thong.
R: No way. I bet he has a zebra stripe man sling.
Then he tweeted about me learning some new dance moves and I responded with something about Francis probably having a mirrored headboard.

After they finished, I went up to the concession area to find a friend and it seemed everyone was there. I'd already seen Halloran and Rich & Kristen Cook, but I bumped into Transfer, some Nervous Wreckords, Ray Suen, Owen Salerno, Ron Fountenberry (Softlightes), Pyles and his wife, Sharon, and a handful of others. It was a nice break before heading back down to my seat. I loved the show and dug the visuals projected behind the band, it would've been nice to see a little more light on the actual band members...for photo sake, too, but also just visually I like to see performers and on a huge stage. When the band played KIDS, they were all instrument free, which was a little odd but gave the band the opportunity to let loose on stage a little before going into their encore, which we moved right front and center for. It's funny how a loose camera policy lets the Elite staff be so much more relaxed about everything, really only having to get people from standing on their seats.

All in all, it was a fantastic show and though not sold out, the full theatre on a hot summer night really made this feel like a kick off to summer.