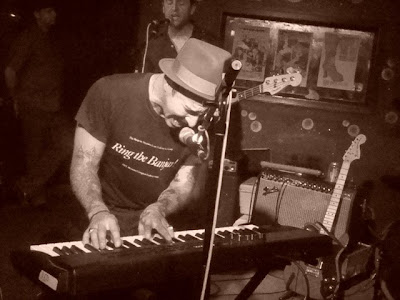 This week some of our San Diego friends have been making waves, so I thought I'd do a little local roundup.

The Drowning Men are kicking off a west coast tour Saturday night at Hensley's Flying Elephant. I don't get to Encinitas very often, but that place is super cool and I throughly enjoyed myself when I checked it out for the first time a couple weeks ago, not to mention my hamburger kicked ass. The band is heading north, with shows at Hotel Utah in San Francisco on 7/20, The Blue Lamp in Sacramento on 7/21, Rotture in Portland on 7/22, Lucky's in Eugene on 7/23, and a huge show on the Neumo's stage at the Capitol Hill Block Party in Seattle on 7/24. (The Nightmarchers are also performing.)

Crocodiles have a new video that made its exclusive debut this week at Spin.com. The video is for "Sleep Forever" which you can download here frm Fat Possum. (right-click, save as) The video is super fuzzed out with several layers of visuals, but the live performance appears to be shot at the band's recent Casbah show, or more likely during the soundcheck,since that show was insanely crowded and the lights were barely on.

Tim and I were driving today saying how it's strange how we never see Andrew Bernhardt like we used to. He used to be everywhere. I did see him a couple weeks ago and he's all in love and shit, but he's also been really busy with Lights On, who recently celebrated their CD release and are currently in New York playing some shows with New Mexico (formerly Apes of Wrath). I hope they kill it in Brooklyn, just don't get too comfy because we want you back home. They were featured on Brooklyn Vegan and Insomnia Radio (though the latter has the CD release info incorrect. The CD release was July 3rd at Tin Can). 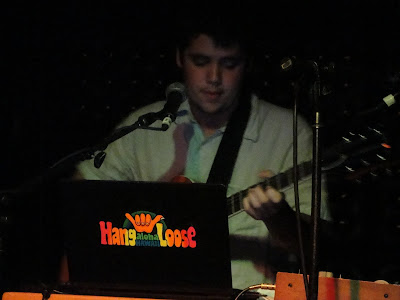 D/Wolves released their first self-titled CD. It is available FREE on Bandcamp, or you can (and should) buy a physical copy for $5. I seriously love these kids and am so happy they're playing my showcase at NPMT, though I had to fight someone else off who was trying to steal them to another showcase. I feel like mama bear with this band and will do what I can to both help and protect these guys.

The Reader asked me to mention that they are constantly working to make their music database the most comprehensive in San Diego. You can check it out here, where they added a "This Just In" section that has a ton of updates from local bands.

Lastly, I mentioned that West Coast Tavern is hosting music on Thursday nights. I'll be booking these nights, so if you're interested in playing, please feel free to reach out. These are one band shows for about an hour to a crowd as the restaurant winds down restaurant service around 9 or 10 pm.
Posted by Rosemary Bystrak at Friday, July 16, 2010

That is very cool that west coast is doing weekly music. The more live-music (and non-DJ) venues in this town the better