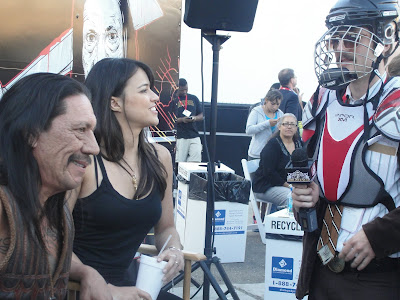 One of my favorite things about this year's Comic-con is searching and discovering things via Twitter. As I was trying to make sure that I had every Comic-con event covered, I came across First Showing. Theoretically this is a site I would never visit since it is all about movies. I've never had a Netflix account and generally make it to a movie theatre about twice a year, and those are usually screenings, so obviously movies aren't my thing. Still, I found the site and their infinite Comic-con wisdom and was trying to educate myself on the big deal shit at Comic-con 2010. And then I found Bob $tencil. He's now like my favorite person ever, and I tried to get a clip of he and Tim Pyles counter-interviewing each other, but then Michelle Rodriguez showed up and I lost both of them mid-taping. Regardless, if you don't know Bob, it's time to meet him.