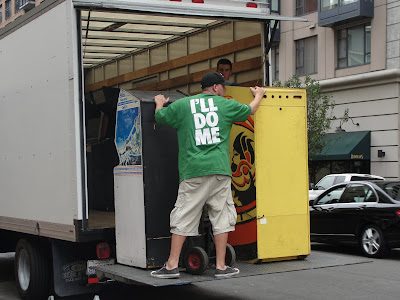 I had a great day at Comic-con, running around with Mr. Pyles after our Casbah meeting and finally making it to the convention center around 3. On our way to the Con, we bumped into Ken (aka @RedTheTrucker) who gave us the lowdown on several offsite events and things to see on our walk over. We stopped by the Culy building near at 335 6th (between J & K), where Flynn's Arcade was being set up again and watched them unload some video games. 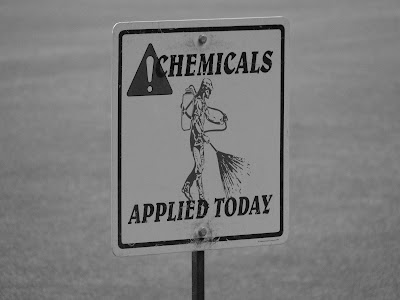 We then swung by Petco Park, where the Candy Factory was being transformed into Britt Reid's Garage to promote the Green Hornet. We, however were more interested in checking out the field. There are rumors of a huge event this weekend so we took some photos from the Padres Store and concluded that they definitely were going to set up some sort of stage or platforms to protect the grass. Rumors of Daft Punk playing on Saturday to promote Tron abound. I have no information about that, though it has definitely been rented all day Saturday. What I've been told and been able to find out is that on Friday, TV.com is hosting the NOW awards. They're from 5-7pm with doors opening at 4pm. John Oliver is hosting, with Spoon and VV Brown performing live. 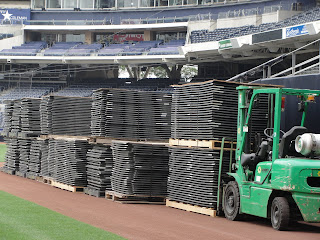 We finally made it to the convention center and unintentionally cut into the press line. We were quickly scolded by others that the end of the line was far, far away. It was ridiculous how long that line was. So naturally we decided that was a terrible idea and went into the general registration area and walked right up with no wait and successfully got our press passes. When 75% of preview night attendees are "Press and Industy" this stupid line just doesn't make sense.
After getting our badges, I had to get my listings in to SoundDiego, so I found the media room while Pyles found a little hideaway outside (where he also found an outlet to charge his phone). Once I finished my work, we wandered until the doors opened and made our way in without waiting in one of those crazy lines. I would say at this point that those lines are primarily for collectors and people who know exactly what limited edition things they want to buy, but I ended up buying some of that limited edition crap...still I'm glad we avoided lining up for anything.

I'd post more photos but they're gonna be over on SoundDiego.com, so instead, I'd like to share with you one of my favorite moments of the night.

By the way, even with all my tips, I feel busted and broken after just one day. Tomorrow I expect to travel lighter and I hope my nieces and sister appreciate that damn Ugly Dolls collector series I bought them and then had to lug around for 4 hours. I believe my plan tomorrow is to hit the con in the early afternoon, hit up Britt Reid's Garage, check back on Petco, drop by the Wired readers lounge, grab a slice of pizza at the Cartoon Network Pizzeria, check out Machete and the taco truck and then finish up the night at FLUXX. No rest for the wicked.
Posted by Rosemary Bystrak at Thursday, July 22, 2010