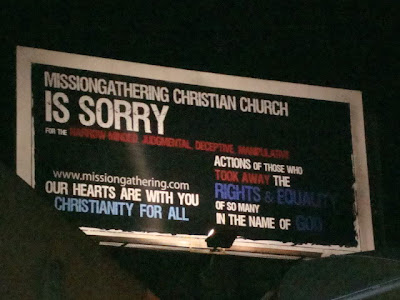 This year's Pride Festival looks to be one of the most entertaining yet, with Eve set to headline the event on Saturday and DEVO headlining on Sunday. The event that gathers thousands of San Diegans kicks off with a parade starting at University and Normal Street, then heads west on University, and turns left at 6th Street toward Marston Point (the portion of Balboa Park on the south side of 6th and Laurel.)

You can find all of the information you need to know about Pride 2010 HERE.

As usual, parking and traffic will be pretty insane, so if you're not walking or riding a bike, consider SDMTS which has some rerouted busses for the weekend. It's only $5 for an all day bus pass.

You can also park at the North Park structure and use the Park2Park shuttle that will have a special extended route for the weekend. The P2P wristband also gets you some discounts at local bars and eateries.

This year's event theme is One World, One Heart, One Pride, so I thought I'd repost the photo that was the most visited page in sddialedin history. In one weekend, this blog post got over 60,000 clicks. (normal traffic to my site is usually in the hundreds, not thousands, unfortunately)

Mission Gathering Christian Church
Is Sorry
For The Narrow-Minded, Judgmental, Deceptive, Manipulative
Actions Of Those Who
Took Away The Rights And Equality
Of So Many
In The Name Of God.
Posted by Rosemary Bystrak at Thursday, July 15, 2010

Email ThisBlogThis!Share to TwitterShare to FacebookShare to Pinterest
Labels: sd pride, things to do