There are a few things at Comic-Con that don't quite fit into my listings but that I wanted to post anyway because, well, they're awesome. 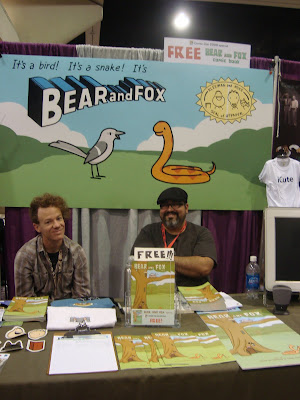 First, my good friend Randall Christopher is going to be back at Comic-Con with his comic book, Bear and Fox. You can check out his older comic, Kleeman and Mike. There's a free release party Tuesday night at Tin Can and all attendees get a free copy of the book. (Hint: You'll definitely want to pick up tomorrow's CityBeat.)Be sure to stop by his booth, F-11, at the Con. Also, you know Ted Washington from the Casbah and Winston's, check out his work at the Con. His imprint, Puna Press will be in row L table 02 in the Small Press Pavilion.

Read more if you 'keep on reading'


In other events, I've always been fascinated with random competitions on cable TV. One time I was in Vegas and the World Strongman Competition was in our hotel. I like watching mud runs. And who doesn't love food eating competitions? Though until the recent hullabaloo, I didn't realize Major League Eating was an official league. 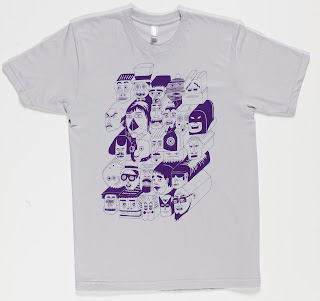 Cartoon Network has some special things planned for the week. They're taking over Ciro's Pizza (536 Market) and turning it into The Cartoon Network Pizzeria with some free happy hour food and drink. (The place is tiny, so expect it to be a hit and run kinda spot). Adult Swim will have ice cream trucks with free Ben and Jerry's circling downtown with show talent on the trucks to interact with fans on Thursday, Friday and Saturday. Follow @SDSweetTreats to know exactly where they are.

There will also be an Adult Swim Shop at their booth (#3351). They're gonna have a silent auction each day for one of four 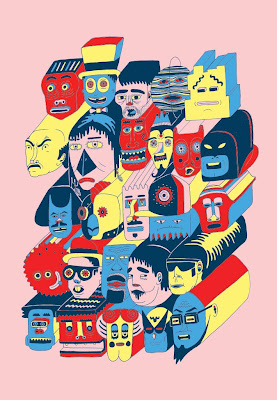 exclusive art pieces from the makers of Aqua Teen Hunger Force, Metalocalypse, Robot Chicken and The Venture Bros. They will also have Comic-con exclusive t-shirts ($20) and prints ($25) as seen here.

The final thing (at least for this post) is the new Michael Cera movie that is sure to make waves. Scott Pilgrim vs The World is going to be highly promoted (as with this giant wrap on the Hilton Bayfront. Funny enough, they're actually setting up camp at the Hilton Gaslamp across the street and will have cast meet and greets, live music by Gorgeous Got A Gun (who won their Indie Rock vs The World contest), t-shirt making, games and more. See the full press release here. Catch the fun on Thursday from noon to 4, and Friday and Saturday from 10 am to 4 pm. Follow them on twitter @SPvsCC.
Posted by Rosemary Bystrak at Tuesday, July 20, 2010