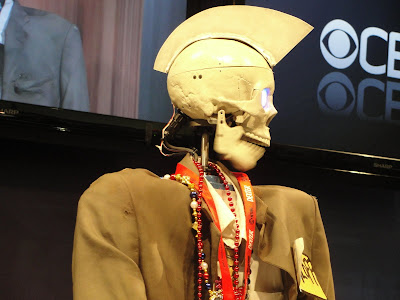 While Sunday might've been the day of the already blown Comic-con wad, it was also a really fun day for me because I got to hang with my Seattle friends that I met last year at the True Blood happy hour. If Kathy Griffin can have her Gays, then I get to have My Nerds. And I wouldn't say so were it not with total affection (and confusion at their topical geek fights which they would alert me to...'um, here we go again...x vs. y in the neverending fight over who would win z battle').
Before I met up with them, I roamed the Comic-Con floor and visited Randall at his Bear vs Fox table. I discovered he was just across the aisle from the creator of Wow Wow Wubbzy (*love*) and bought a children's book for $5. I also happened across Geoff Peterson, the robot from Craig Ferguson (The Late Late Show?), and I asked an awkwardly stupid question of the robot just to get the signed glossy of him and Craig. Fortunately being last in that line put me first in the line to grab a free copy of Shit My Dad Says which I've already finished reading and is entirely worth the hype. As the Con wrapped up, I met My Nerds at the Marriott, and when they asked for a place to chill and eat, I suggested Analog, which has a killer happy hour, even on Sundays, and we ate and drank to our hearts content. When all of that was done, there was a free show at the House of Blues with The Spinto Band and Miniature Tigers that was awesome, so I got that much more time with my Seattle friends. I really hope that I get to see the boys again before next Con, and I have a good feeling that they have some magic brewing with their start-up. To be continued on that aspect, but as a finale, I have to say I was really sad when the Con came to an end, and admittedly spent some time physically recovering, but also had to spend some time recover mentally from the buzz and the high that I experienced all week. Till next year, I'll go back to my regular programming here, but not without hope that I am fortunate enough to participate again next year. More pics if you 'keep on reading'.