Casbah Bartender Gets Fanboy, A Rock and Roll Thriller, Up on Amazon Prime! Rent or Own It Now!

Casbah Bartender Gets Fanboy, A Rock and Roll Thriller, Up on Amazon Prime!

Five years ago, Casbah bartender/bar manager/co-owner Ben Johnson talked his fellow short film makers into making a feature length film. Luckily they didn’t know how large of a task it would be. After two years of filming and almost three years of editing, Fanboy was born, selling out 5 screens at the South Bay Drive-In in San Diego in January and February.

Fanboy has been accepted onto Amazon Prime streaming platform, and is now available for rent or purchase.

Fanboy is a rock and roll thriller that follows Xenos, a band on tour, and the obsessed superfan who’s following them! Filmed in San Diego and featuring mainly San Diego musicians and artists, including several Casbah employees and patrons, Fanboy is written, produced, and directed by first time filmmaker Ben Johnson, who also plays the title role.

Shot at Casbah, five more venues (Soda Bar, Black Cat, Blonde, Whistlestop, Ken Club), and several other locations throughout San Diego, it’s a thrilling crime drama seen through the lens of the underground rock clubs that, before this COVID-19 nonsense, were our homes, and will be again! 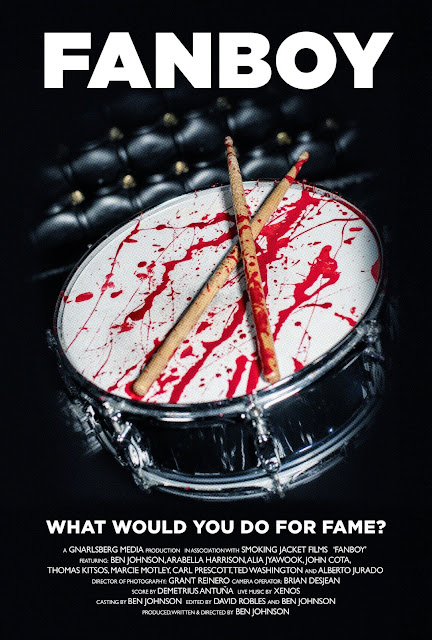 PLOT: Xenos is playing their first show of their first tour. The band is composed of three members from previous bands that almost “made it” (John Cota, Arabella Harrison,  Alia Jyawook) and Duane (Thomas Kitsos) - the drummer who had the idea, the money, and the means to make the tour happen but not the talent. When Freddie Proehl (Ben Johnson), Xenos’ biggest fan with a solid reputation as a shredding drummer albeit a weird dude, comes to see this all-star band show after show, he starts pressuring the members of Xenos and their roadie Ronnie (Alberto Jurado, RIP) to give him a shot on drums. As Duane continues to show he won’t be drumming any better, the others begin to consider it.

Fanboy is a story about the lengths people go to for even a slice of fame.

Please check out this movie, which is already being heralded as a cult classic!

Click the images to rent or buy, or go here.