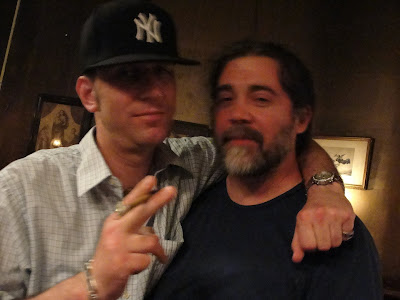 (Charles, the owner, and Mike Down, GM at Von)

I returned from New York yesterday and I have a bazillion things to catch up on- emails to respond to, music award nominations, show listings,press releases to send- this is gonna be a brutal week. There's a lot of stuff I wanna write about my trip, but then I think about it and there's more NFB stuff that I can't talk about online so maybe I'll have to see if any of my photos came out and if there's really anything I can say other than I loved New York and if I could go out there every few months on a regular basis, I would do it in a heartbeat. 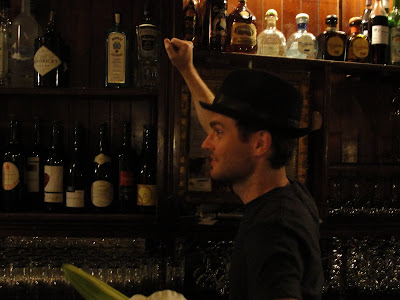 (Drew, one of the many sexy bartenders at Von)
One night I can talk about was Thursday. I had rolled into my cousin's at about 9 am, so after I caught up on sleep and Bravo, it was time to head out to salvage the day. I was trying to meet up with Jesse LaMonaca and he said he'd be at Union Station, but by the time I got there, he'd gone crosstown, so I wandered south and stumbled into a bar call King's Head Tavern. Dylan was the really nice bartender there working his first shift at the spot, so we talked for a long time while I waited for Nima and Clarissa to meet me. A couple beers turned into...well...a lot. I think I was at that spot for a good three and a half hours before we cabbed over to Googie's for Jesse's show. He packed the room with friends and family from New York, Connecticut, Jersey and other places and debuted a new song, "Side By Side". I'll have to let him see the video and approve for posting. 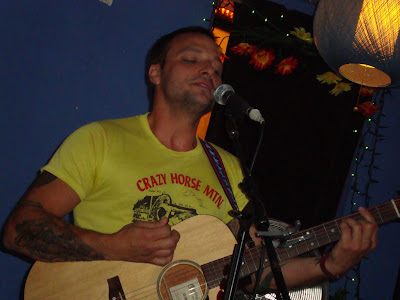 My friend Mike showed up to Googie's so afterward he joined Nima, Clarissa and me in some pitchers of beer across the street. Eventually it was late and everyone was well sauced and had to leave and I was on my own wandering. I stumbled into a bar and that's when I met these guys:

That's Thursday night in a nutshell. Since my cousin asked, you're probably wondering, too. The answer is no, I didn't hook up with these guys.
Posted by Rosemary Bystrak at Monday, June 20, 2011