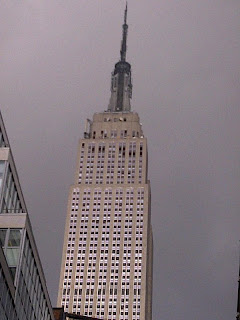 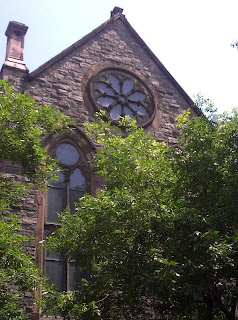 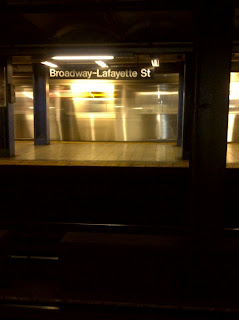 Sent via BlackBerry by AT&T

So I'm coming on my third day in New York. So far it has been a perfect vacation. I'm so used to taking trips to places even more chaotic than home- SXSW, Vegas, LA- that you'd think I'd come here and be psycho and jump into the chaos of this city. In reality, I've let all the people and noise merge into white noise and have felt nothing but calm as I traverse the city. It helps that I'm staying in my cousin's beautiful apartment on the upper west side, just a block from Central Park, but it also helps that I don't have to do anything while I'm here. Other than 5 hours of web stuff yesterday, I'm actually on vacation.

Upon my Monday night arrival, we decided to lay low. Other than some slices at Francesco's and some wine for home, we didn't do much of anything, which was just fine by me.

On Tuesday I woke up crazy early which is a bit opposite of what is supposed to happen, but I suppose it helps that I never really sleep normal hours anywhere. I did some work, walked my cousin to her train. Then grabbed breakfast at Lansky's, this kosher diner near her house. I walked back through the park, lounged and worked back at the pad, then ventured to meet Joanna, a publicist that I've been working with for years now, for lunch. I was really early which gave me some time to shop. Despite all my whining about being poor, there were a couple things I needed...some good bras and some sneakers with traction (since I almost ate shit 3 separate times when it started raining). We had lunch at Markt which served Belgian food and had a menu resembling Bleu Boheme. We talked D/Wolves, TV Girl, Transfer and others and then she was back to work. I wandered in the rain until connecting with Inge from Girlie Action and decided to drop by their offices, too, meeting the team responsible for much of my email, but also much of my tasty music. We chatted for a bit, I got some new music (including the new MMJ!!!) and then went back to the fashion district to meet my cousin. We relaxed a bit before grabbing an amazing Spanish dinner at Cafe Rondo. Beef empanadas, lamb albondigas, tortilla espanola, gambas al ajillo, and shared a buterrflied filet with chimichurri. Delicioso.

It was getting late so we went home and watched The Voice until she called it a night and I left to see what trouble I could find. My cousin lets me do what I want, but I was under orders not to take the subway after 10pm, so I found a small bar, had a beer and then got a call from Mike Down. He's consulting for a bar called Von, so I hopped in a cab and met him there. I also met his friend who happens to be a tattoo artist. I think I might have to get some ink to commemorate this trip.

Now I'm heading south to meet up with Jesse. He's already hard to nail down plans with, but apparently he's already spent half the day cocktailing so though we were supposed to spend the day in Brooklyn, we still have yet to meet up. Nima is on his way to the city, too. I just hope my liver can withstand the night ahead.
Sent via BlackBerry by AT&T