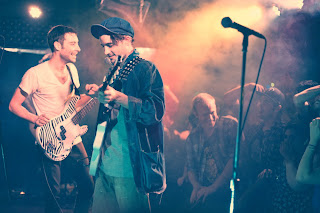 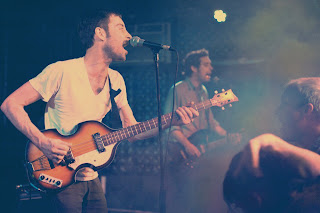 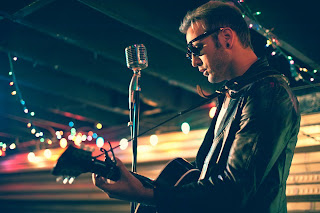 Thursday morning, I woke with the exuberance of a fifteen year old boy going to an all girls camp for the summer. Why you ask, because the Black Lips were in town! Since 2003, every time these boys have rolled through town it's felt like a holiday. The day just builds up momentum until it all explodes at the show later that night, I've only missed one of their SD show's so I know this to be true. First things first though, I want to clear up any misconception about this band. The antics such as peeing in each others mouths, vomiting onstage, running around nude, lighting stuff on fire are pretty much no more minus the India debacle a few years ago when they were banned. These guys plot their attack and the antics were always meant to rally the crowd and start a little buzz, they're a lot smarter than people give them credit for. So all that being said, I can continue with my review.

After pre-gaming at the house with Pinot Grigio?!?! I headed over to Bluefoot to meet my cohorts and start to take it up a notch, after Mikey's Mississippi Blackout shots we were ready and caught a cab. When we arrived we were greeted by the usual "dude, you have any extra tickets bro?" When will people learn? It's a Black Lips show...they sell it out early every time - get a clue San Diego! We walked in and Pizza and The Personals we're finishing up, but I liked his Joey Ramone type of vocals. Definitely will check them out next time they're in town; their merch was clever...they had a pizza box with all their stuff neatly stacked and pizza themed. Cerebral Ballzy from New York were up next and this band is not for the faint of heart, this is straight up NYHC mixed with doses of gutter punk and Bad Brains influences. The energetic riot inducing punk rock is perfect for skateboarding, even check out their website http://www.cerebralballzy.com/. They definitely won Joe, Skyy and myself over, I won't be missing them at Detroit bar in a few weeks.

Now for the band of the night and my "unbiased" review of the Black Lips: They love to go on nice and late when everyone is teetering the fine line of buzzed to drunk to blacked out. Joe, Ian, Cole and Jared took the stage and set off into the riotous anthem "Sea of Blasphamy", their personal favorite to open with and get the crowds energy up. Next up they went in to "Family Tree" the first song off their new album Arabia Mountain which was just released this Tuesday on VIce. My dancing around and swirling and sloshing of my beer was a little too much for my girlfriend's liking, so I set out to get closer to the action as one is supposed to at a Black LIps show. If you come out of a Black Lips show not covered in beer, dirt, sweat and a couple of scratches, you probably didn't experience it to the fullest. A couple of tracks off of Good Bad Not Evil and "Dirty Hands" and the crowd was really feeling it until Cole started to have some issues with his amp and then everything went haywire. The guys were uber frustrated and it started to show through, they really couldn't mask their frustration. A couple of songs had to fall to the weigh-side, but the boys pulled through and won the crowd back with their anthem and crowd favorite "Bad Kids", when they played "Modern Art" I actually felt like I was in the video http://www.youtube.com/watch?v=Gj5NoVOEDNg pretty buzzed nonetheless. All in all it was an awesome show, surrounded by some of my best friends and I couldn't have been happier. The Black Lips embody the meaning of fun and for that I will always love them, I'm truly proud of my friends and what they've accomplished on this album. They are one of the hardest working touring bands in modern day music and they deserve all the success that comes along with it....if you feel different about them...you know where to shove your opinion. Big love to Rosemary, the boys from the ATL and Casbah.