Pickathon presents A Concert A Day Helping Musicians in Need 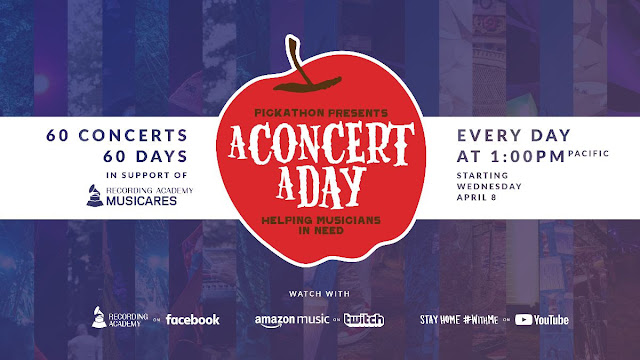 This information was provided by Hearth Music:


April 7, 2020 (Portland, OR): As we fight COVID-19 together, the power of music to bring hope, foster community, and encourage mental health is more resonant than ever. With this in mind, Pickathon is excited to present A Concert A Day starting April 8, an initiative to help musicians and artist communities through the Recording Academy’s MUSICARES® organization. During this time of hardship, with so many artists unable to tour and so many people stuck at home, Pickathon is opening the vaults to premiere one full concert a day for 60 days, streaming for free on Facebook, Amazon Music’s Twitch channel, and on YouTube. All donations received will go to MusiCares COVID-19 Relief Fund.

Each day for the next 60 days, starting April 8, Pickathon Presents A Concert A Day will premiere a full recorded concert from past festivals. Featuring renowned artists across many genres giving career-best performances, these concerts from Pickathons past will stream with unprecedented direct support from the Recording Academy, Amazon Music, and YouTube. At the A Concert A Day Facebook Event, the Recording Academy will host each concert premiere daily, joined either by the performing artist or a renowned journalist. The host will answer fan questions live and comment on the performance. Amazon Music will stream the concert through its channel on Twitch, and the concerts will also premiere on Pickathon’s YouTube channel and be featured as part of YouTube’s Stay Home #WithMe initiative. After reaching out for help, Pickathon was overwhelmed by the response, welcoming the support of partners like the Recording Academy, Amazon Music, BandsinTown, Bandcamp, and YouTube who collaborated in one common effort to support A Concert A Day. All donations received during the livestream will go directly to MusiCares COVID-10 Relief Fund to help musicians in need.

Never before presented in full, these live concerts come from Pickathon’s extensive vault of content. Filmed in multi-camera HD by an army of audiovisual specialists each year, they’re part of Pickathon’s movement from an annual festival to a year-round content creation company driven by some of the most creative minds in Portland, Oregon and the Pacific Northwest. Stages at Pickathon are planned like independent films, with architects and visual artists creating one-of-a-kind experiences that drive the artists to career best performances which are rendered in multi-camera HD and subsequently released year round.

Championing artists, fostering community, and innovating new ways of experiencing and discovering music have been the cornerstone of Pickathon’s identity for over 20 years. Now is the time to band together in support of touring musicians, to spread hope, and to enjoy A Concert A Day.
Posted by Rosemary Bystrak at Wednesday, April 08, 2020