This week marks the 50th Anniversary of Earth Day, and there are small and massive virtual celebrations and opportunities for activism this year. I shared a couple of these links earlier this week, but found a few more that are worthy of your time (and to be shared with kids who apparently aren't challenged enough by at-home schooling at the moment *cough cough*) Please send me any I may have missed!

See details on Earth Day Live after the jump. 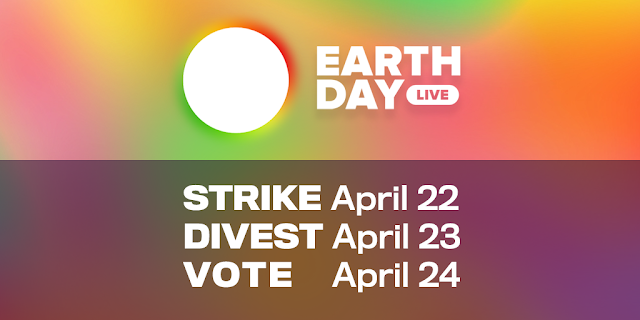 This 50th anniversary of Earth Day marks a turning point. We can continue with business as usual, or we can join together to rebuild our economy to protect everyday working people from the COVID-19 crisis and the coming climate emergency. As Congress discusses future relief and response plans to COVID-19, we join the calls for a People's Bailout -- a platform that would give relief to people and communities, instead of a blank check to corporate polluters, who perpetuate income inequality and climate change.

For Earth Day Live, we'll demand that Congress and major corporations put forward bold policies that will create a stronger democracy and chart a path to a more equitable, clean energy economy that can help lead us out of this crisis. Join the call to take action and make your voice heard in real time with thousands of other participants. Together our voices are powerful.

Each of the three days has a focus:
Earth Day Live will provide a platform that amplifies the voices and messages of local and frontline communities in the fight for a healthier and more livable future. We will be joined by musicians and celebrities, thought leaders and movement activists.

(From Strike With Us)

Earth Day Live will include performances and appearances from entertainers across music, TV, and film. There will be DJ sets each evening to help build community and grow the climate movement.

The program includes unique celebrity-activist exchanges, including a segment with communities on the frontlines of the climate crisis, hosted by actor Luke Baines and journalist Sharon Carpenter and a discussion about climate grief with New York Magazine Deputy Editor and “The Uninhabitable Earth” author David Wallace Wells and climate psychologist Margaret Klein Salamon.

In the midst of a global pandemic, Earth Day Live aims to spur collective action to protect our communities and our planet, through performances, conversations, and training sessions curated by climate activists.

Earth Day Live will be live from 9a-9p ET on April 22, 23, and 24th on www.earthdaylive2020.org and accessible to watch on platforms such as Facebook, YouTube, Twitter, and Twitch.

The Youth Climate Strike Coalition is composed of the following organizations:

Divest Ed is a training and strategy hub working to resource, vitalize, and broaden the fossil fuel divestment movement one campus campaign at a time.

Earth Guardians is an organization that empowers young environmental and social leaders through education, tools, and resources, in order to become effective leaders in their communities.

Extinction Rebellion Youth is led by a community of young people within Extinction Rebellion, a network focused on coordinating national civil disobedience actions to draw attention to and persuade governments to act on the climate and ecological emergency.

Future Coalition is a national network and community for youth-led organizations and youth leaders. Future Coalition works collaboratively to provide young people with the resources, tools, and support they need to create the change they want to see in their communities and in this country.

The International Indigenous Youth Council is an organization that seeks to organize youth through education, spiritual practices, and civic engagement to create positive change in our communities.

Sunrise Movement is a youth-led movement of young people committed to stopping the climate crisis. Sunrise Movement is currently leading actions around a Green New Deal, including by planning hundreds of launch parties across the country in January 2020.

Zero Hour is an intersectional movement around climate change. In 2018, Zero Hour organized the first official Youth Climate March in 25 cities around the world and laid the groundwork for the climate strike movement.
Posted by Rosemary Bystrak at Tuesday, April 21, 2020