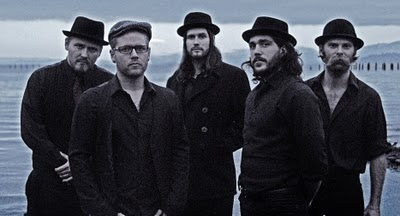 The hardest part of getting ready for the Ryan Bingham and the Dead Horses/ Silent Comedy show was figuring out what to wear. Let me explain- I have played with Ryan Bingham, and know that this boy is straight up rodeo, country. (This Oscar winner is an ex-bullrider from New Mexico for crying out loud!) But I've only seen the Silent Comedy at U31, The Royal Dive, and the Casbah- so deciding between my Wranglers and Ariats vs. Chick Jeans and Vans was a little tough...(But since I don't have any chick jeans...These hips don't lie... jussayin...) One thing was for sure... I was gonna wear flannel. (but was it gonna be tucked... or untucked... sigh...)

But so did every other person at the SOLD OUT show at the El Rey Theatre in Los Angeles last night. The line for the show wrapped around the Wilshire sidewalk, and seemed to surprise every single LA model and actor/(AKA Baristas and waitresses...) who stopped to ask, "Um... is this like... the line???"

The show started with the band's front man, Joshua Zimmerman, conjuring up the spirits of our ancestors, to come out of the Pacific Ocean and help the crowd respect what the Silent Comedy was about to slap them across the face with. The spirits definitely showed up through a SCREAMING harmonica solo by the obviously excited, Tim Graves, who started the show in his usual rambunctious manner and kept the excitement going from beginning to end, with a climax of climbing up the sidestage and playing a ridiculous-lung collapsing solo from 30 feet in the air. (One handed... and for a hell of alot longer than 8 seconds!!!)

The band's talent obviously surprised the sound/light guys at El Rey because on the second song, when Jeremiah Zimmerman started to sing, they couldn't seem to figure out where his voice was coming from or where even where he was on stage for a few seconds- Then, as he moved down to work the crowd and go back again, and they simply didn't have enough staff to keep up with the Silent Comedy's energy! (Grrrrr... That dude can SING!!!)

But to the Audio/Visual guys' credit, looking at the Silent Comedy's style, you might think that they were going to do covers of Mumford and Sons all night- as I overheard a girl next to me drunkenly ask her boyfriend... (or agent... or manager... or whatever he was...) They don't seem to have the style of a rock band that's about to take you prisoner, get you drunk, tell you that you don't belong in church, and then make you sing "Hallelujah" with them, but that's exactly what they do, and every person in the crowd will find themselves led to the "waters of rock" and "baptized" by their sound. (Please don't tell my mom I wrote that...) (Also, will you guys take me shopping???)

The Silent Comedy also paid tribute to Chad Lee's grandfather who passed away the day before the show. Playing an extremely resounding song in his honor, they grasped the hearts of every person in the theatre.

I bought their album/t-shirt/pin/postcard deal and will be rocking it at my next show, because they have made me an even bigger fan than I was before! If they are coming to your city, do yourself a favor, and purchase your tickets early, so you don't miss one of San Diego's new class of musical royalty, that gives a headlining performance as an opening band.