E-Mail of The Day: Two Gallants Are Back!! 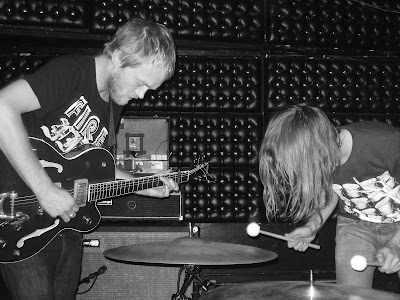 It's no secret I'm a HUGE fan of Two Gallants. In fact, I think I discovered them right around the same time I found Rocky Votolato's music and have been a fan ever since. I've been in touch with Tyson Vogel recently (trying to get a house/gallery show the week before SXSW if anyone has a space for his solo project, Devotionals. Park Gallery has not returned emails) and I'm also a huge fan of Adam H Stephens and the solo project he released last year. That's why when I saw the email below popup, I stopped what I was doing to open it. Though I'm in the midst of trying to figure out how the hell I'm getting to SXSW and how to afford it all, I have to say a road trip to San Francisco might be in order after reading this.

Dear dear old friends, fans, family. It has been too long. We are writing to announce that after over two years apart, we, two gallants, are once again one. Not that we were ever not one. But we have strayed quite a distance from the comforting light of the home fires. We have walked the dim lit alleys each with its requisite border of silhouetted doors. Watched the illusory trail of e-missives sent into the night. Necks in a permanent crick from askance browsings of online dating site profiles. But oh the hollow feeling to wake with the scent of a stranger upon the lips and the ineffable sense of longing for the way things used to be.

Two years ago we had become so caught up in the motions of it all that we no longer knew quite what we were doing and why we were doing it. Cogs in the machine. Dust in the wind. But there's nothing like a well earned absence to make the heart grow fond of itself once more. We hope that you can find it in your hearts to understand. We know that some of you have been asking when we'd be back at it again. If you didn't receive a reply from us its only because we didn't have one. Until now.

Please join us if you can in our dearly beloved hometown of San Francisco on April 23rd, 2011 at the Bottom of the Hill. You can get advance tickets starting Saturday Feb 26, 2011 here. Your presence will be extremely welcomed. For those of you who have been with us for a while and those of you who intend to, we appreciate your patience and your continued interest in the music we make.