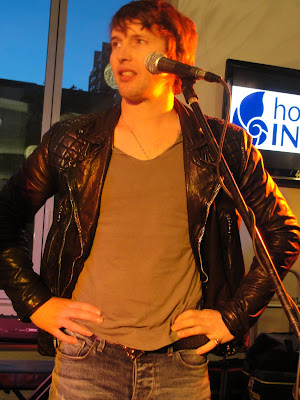 Whenever I get invited to a private show, I like to tell the story of how I ended up there. This particular week, I was at West Coast Tavern watching Jesse LaMonaca and got a tweet from Cristy Westfall from Radio Sophie, asking if we'd like to attend the lounge the following week. I responded that it would be great, but that Jesse was also available to play if there was any room for an opener. Long story short was that because this was just a short presser, there wouldn't be an opener, but in the meantime Jesse's record got in the hands of James Blunt's label, so you never know what can come of things like that and for a couple days as we awaited an answer, things were pretty exciting. When Friday did roll around, I was there pretty early and kicked off what ended up being quite a busy night. 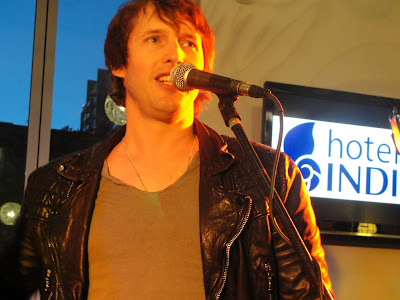 James Blunt's third record, Some Kind Of Trouble, dropped in the UK in the fall but was only released in the US a little over two weeks ago. As such, and as a preview for his summer tour that will find him performing at Humphrey's Concerts by the Bay on May 3 he did this little radio lounge for Radio Sophie. I love the Indigo Hotel, but it was unfortunate that despite James' pleas to the crowd, there was still a lot of chatter and though I heard he was originally gonna do six songs, cut the set to just 4. After his set he did photos with everyone and got extra introductions to Jesse and James which was cool that they got to hang out and have a legit conversation with him. Here are the four songs James Blunt performed. Click the right and left arrows to navigate the playlist. Thanks to Cristy, Mike, Kirsten and everyone else at the station that made this happen, and thanks for letting me be there to enjoy it.