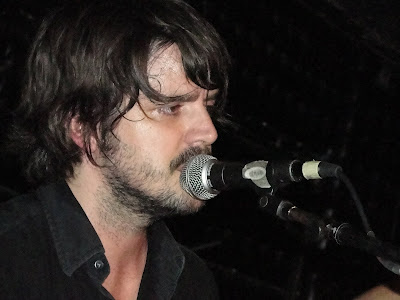 When Cary Brothers gets to San Diego, I want someone to immediately take him to the closest taco shop and buy him a California Burrito. I don't know why I decide to bring these up in every interview, but Mr. Brothers has never had the pleasure of sinking his teeth into what I think should be named "the official food of San Diego." (Mayor Sanders, if you're reading this, are you hiring???) Being raised in Nashville probably had a lot of up-sides, but never having french fries in a burrito is simply not what I call a happy childhood. But all kidding aside, when you go to his show, (And I know you will by the end of this article…), take the poor guy an El Zarape's California Burrito.

Cary Brother's latest album, "Under Control" has a continuity that is not replicated in most of the albums that I keep in my car. (Justin Bieber should've won that grammy… and yes… I inserted this into the middle of this paragraph…) "My first album felt like it was a bunch of 'singles', and I just wanted this record to be something you could listen to from beginning to end and just have it all make sense." said Cary while we talked on the phone Monday afternoon. And with songs like "Belong" (Listen NOW), which seems to bleed nothing but pure emotion and offer unexpected twists, it is a refreshing change from the standard 4/4, 140BPM songs that we hear on the radio. This album proves that Cary is not only a musical genius, but feeding a counter culture that most music lovers may never tap into.

Cary has a pretty full year this year. He is going to be doing a US tour with his good buddy from school, Joshua Radin and girlfriend, (Unviersal's newly signed), Laura Jansen. "This tour is going to be a love fest", said Cary. "Every single person on that bus is a good friend of mine. I've been really lucky in the last year that all the touring I get to do is with friends." Along with Radin and Jansen, Cary will be touring with one of San Diego's favorite guitarists, Brandon Walters, who most people will recognize from backing Greg Laswell and graduating from Point Loma Nazarene University.

I would suggest this show to anyone who is in town, because while Cary calls himself an anglophile, (Look it up…) he could easily be mistaken for a San Diego native. His laid back style and humorous outlook, made the conversation feel like less of an interview, and more of just two guys cracking jokes about old friends. (For example, he called Laswell a "Burrito snob" and told me his favorite music placement was a steamy Heather Graham scene… And yes... I looked it up after we talked...) He plans on allowing the music to be free and less restricted than his last tour with Sara Bareilles. "I'm going to take the room on a ride for an hour, rather than trying to simply make them cry, or blowing their ears off…" He plans on breaking the set down so the wall between performer and audience is broken, and he is able to possibly even play "Unplugged" for a few songs. (See... the show at the Loft sounds really good now... doesn't it???)

Cary holds a tight grip on his music in the sense that he doesn't want anyone to tell him what to do when he's recording. (And I quote, "I hope no one ever holds a gun to my head and tells me to write 'pop' music..." -Cary Brothers) This passion for keeping his indie roots is obvious throughout the album and even in the 30 minute conversation we had. Cary is joined by 2010 San Diego Music Award nominee for Best Acoustic, Kenny Eng, who has had a great year and is making appearances in bigger and bigger shows. (Kenny also follows me on twitter, so he must be a good guy!!!)

So make your way out to the Loft at UCSD Wednesday night, and take him a California Burrito, and if he has already had one because someone else beat you to it, enjoy it for me. Cause as much as I'm digging LA… I'm definitely starting to get skinnier off of the lack of good mexican food here.

This is a video of Cary Brothers' last show at the Casbah (sorry for the chatty crowd. I suspect the Loft audience will be much more respectful.)

Posted by JoshDamigo at Tuesday, February 15, 2011