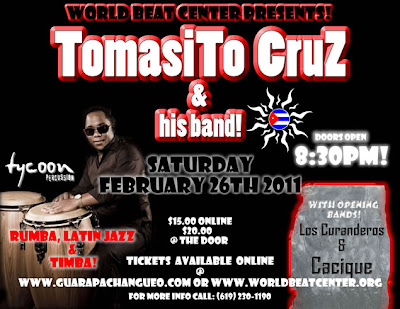 I was recently chatting online with my good friend Juan Sanchez. Truth be told, he was my very first boyfriend...back in sixth grade we "went around" for the magic length of about 2 weeks and had some good times playing 7 minutes in Heaven...first kisses and such...but we've been friends ever since. Juan teaches percussion at the World Beat Center, so if you ever wanna bang a drum or conga or whatnot, he's your guy. He asked me to post about Tomasito Cruz and I didn't know what to say, so I had him write about it:

Tomasito Cruz is a world renowned percussionist, who has performed with greats like Celia Cruz, Willy Chirino, Arturo Sandoval, Tito Puente and the best seller instructional music books “The Tomás Cruz Conga Method”. In his first official solo release, Tomasito introduced himself for the first time as singer and songwriter, never sacrificing the amazement of his congas in this one of a kind production. It is a great honor for us to be hosting Tomasito here in San Diego, as a performer and as an instructor. During his visit Tomasito will hold group workshops and one-on-one clinicians, as well as be interviewed by local radio stations, including Jazz 88.3. The highlight of Tomasito’s visit will be his performance of his new production as “Tomasito and His Band” at the World Beat Center, in Balboa Park with opening acts “Los Curanderos” Rumba group and Latin Jazz /Timba group “Cacique”. On Saturday, the 26th of February. It will be an event to remember for all Latin music lovers!!!