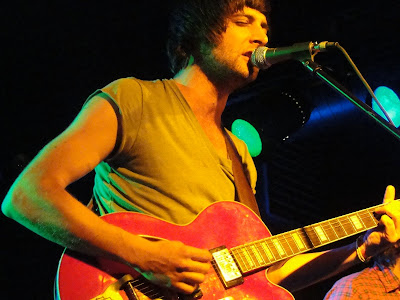 (left- The Love Language at the Belly Up, 9.19.2010)
Two distinctly different indie rock bands will bring their co-headlining tour to our city this Friday when Telekinesis and The Love Language perform at The Casbah. Each band features a multi-instrumentalist with a rotating supporting cast. First, Seattle based Telekinesis is the brainchild of Michael Benjamin Lerner, who has enlisted the production support of Chris Walla on both of the band’s LPs, the latest being 12 Desperate Straight Lines, released earlier this month on Merge Records. The sound on this album is much more upbeat than the initial self titled release. The result is much more immediate to the listener, which should also translate well in a live setting.
The Love Language, based in Raleigh, NC, was founded by Stuart McLamb, and the band’s sound is much more diverse in nature. Being more experimental is sometimes risky, but with the help of a youthful upbeat supporting cast, things works well in the studio and live setting (played Belly Up last year). Finding a unique sound in the indie music world is no small task, but the band’s growth is readily apparent on their sophomore release, Libraries. Songs go from soft to frenetic while keeping the listener’s interest. Also part of the Merge roster, there is no telling where this band is headed, but they seem to be on the right track. This Friday will be your chance to witness both of these fine bands in the cozy Middletown venue. It promises to be a truly great way to usher in the weekend.

Watch a video of Dirty Thing below.

Watch a video of Heart To Tell below.

The Love Language - Heart to Tell from Merge Records on Vimeo.

This is a video Rosemary shot when they played with Local Natives at the Belly Up in September.
Posted by Jeff S at Monday, February 21, 2011