This Saturday: The Rumble is Back at Pink

This Saturday night, The Rumble returns to Bar Pink. This time around, you'll be treated to locals TV Girl and Dirty Gold, and joined by Letting Up Despite Great Faults from LA. As always, this is a free show, but we recommend arriving early so you don't get stuck in line. Info and details below. 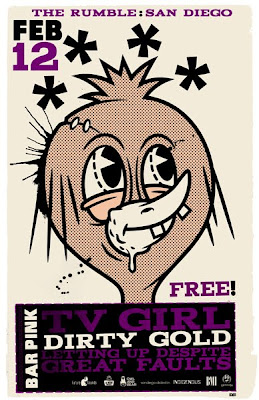 The holiday hiatus is over for THE RUMBLE, and we're back with some fury in 2011 with this lineup of 2 emerging acts from San Diego in TV Girl and Dirty Gold, and this month's Rumble touring act, Letting Up Despite Great Faults. Our friend, DJ Corey Casey is back as the guest DJ for the evening of FREE entertainment.

TV GIRLTV GIRL have already been “Forkasted” by the folks at Pitchfork and accolades for their self titled EP have been popping up all over the blogosphere. This indie pop duo effortlessly sample Todd Rundgren’s “Hello It’s Me” on “If You Want It”, resulting in legit dreamy pop.


DIRTY GOLDThese local teens have captured the attention of everyone and mean everyone (AD’s Autumn Tone is set to release their debut EP this Spring) with their blend of afro beats and surf pop. Their single, “California Sunrise” is blissed out tropicalia perfection, plain and simple.

“There’s a warmly nostalgic undertone of summer-y beach rock that is levitated by the Afro/tribal-inspired drumming, and the vocals carry a sense of whimsy with just enough restraint so as to complement rather than dominate.” - Crawdaddy

"Charming songs that are long on both melody and heartache.” – Rolling Stone


DJ COREY CASEY will be behind the decks all evening.

LISTEN TO MUSIC BY EACH ARTIST HERE

WE'D ALSO LIKE TO WELCOME THE NEWEST MEMBER TO THE RUMBLE SD FAMILY - BLOGGER 'FRIENDS WITH BOTH ARMS'!!