Today has been a very long day. We headed to my mom's to finish building her shed, and Darren and I only almost killed each other a dozen times before we finished, so I guess you could say we were successful. I was hoping to make it to the Zoo today, but now that clocks rolled back, the San Diego Zoo closes at 5pm and we didn't end up leaving my mom's until sunset. We took the long way home, however, with a short stop at the little nature area off 16th street in IB on the Bayshore Bikeway, then drove the Strand through Coronado back home and made a lovely dinner of baked cod with a butter/wine/garlic sauce, vegetable medley, and rice. We're recycling some of our favorite pandemic recipes.

It was also a long day because Nova likes to ask questions with no easy answers. In just our ride home, we talked about the differences between being 'patriotic' and being a 'nationalist', we talked about the branches of the government, the House and the Senate and how the Supreme Court works (or doesn't), and other parties other than Democrats and Republicans, and also where I, as a progressive, stand on things relative to the general democratic party. Exhausting, but important. I'm pretty sure I scared the shit out of her when I said that the period between election day and inauguration day are going to be the hardest time we've seen since the pandemic started, regardless of the results.

I didn't really want to computer at all today, but I had some things to say after the Nova conversation and then catching the news at home. The county didn't send out dailies today or yesterday, so I don't know where the community outbreaks were today, but one of the news channels claims to have deduced outbreak locations with specific data and now the county has pulled that data. If I can find the link I'll post tomorrow.

Anyway, today's stats after the jump. Off to my speakeasy. 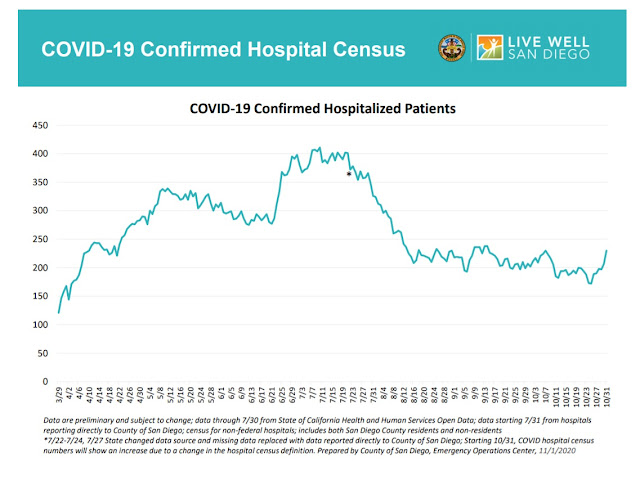