There were so many San Diego bands in Austin this year that it was impossible to see everyone while we were there, so I asked some locals to share their SXSW experiences. This is from Little Hurricane. The band is performing tonight at TNT at the MCASD downtown with The Howls. If you went to Texas and didn't hear from me, feel free to answer the questions and shoot'em over to me for posting. 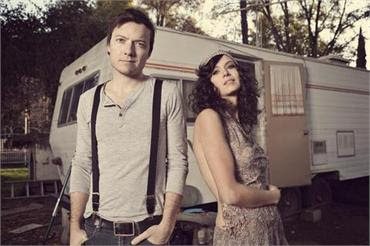 
Did you drive or fly? Any travel stories you'd like to share?
We drove, since we were on tour the month before. The drive was pretty mild, but got terrifying on the way back in New Mexico when we hit a dust storm, with 70MPH gusts and then returned to a snow storm in California!

Did you play? If so, when and where?
We played The Hype Hotel, Beauty Bar, The Lonestar Riverboat, Auditorium Shores, and Buffalo Billiards

How were your crowds? The venues?
The crowds were amazing, the venues/ soundguys varied. Auditorium Shores was one of our biggest shows and stages to date! Opening for The Shins was awesome and totally unexpected!


Any memorable or standout moments from your own shows?
The show on the Riverboat was pretty memorable. We got to see the city while playing music and drinking Shiner on a riverboat! Who could ask for more?!

Did you catch any parties or showcases of note?
We went to an awesome house party across the street from Stubbs. It was a great way to end the festival- with an open bar!

Any wrapup thoughts, lessons learned, crazy moments, cool tales to share?
Last year we got a huge break from a flyer we handed out at SXSW. We would never have gotten to play the shows we had this year had we not gone last year and promoted our band. SXSW is worth it no matter how small or big you may be.

The band has a pretty solid press package circulating to blogs. If you'd like to read it, click the jump.

From Tell All Your Friends:

As a weather pattern forms its shape and sound out of the unknown and invisible into something tangible and rare, so does the dirty blues force “little hurricane”. This storm began when CC hung up her chef knives for drumsticks and turned to Craigslist for collaborators. Tone, a songwriter and audiophile could see something different in her drumming and energy. Together they began their musical outlet crafting songs in CC’s living room that within months thousands would relate to and appreciate.

Staying true to the living room vibe, the pair sets the stage with vintage furniture (complete with built-in speakers), microphones, instruments and lamps. You can almost feel the warmth from the tubes emanating from the ratty old suitcase guitar amps. ¬ Their equipment’s expanded in the many months since—CC even started singing alongside spare bursts of mandolin and harmonica—but the San Diego duo’s bruised sound is still rooted in restless rhythms and heated hooks on their self-released debut album, Homewrecker. That goes for everything from the seamless call-and-response choruses and windswept strings of “Give Em Hell” to the curlicue chords and doomsayer drums of “Crocodile Tears.” And then there’s “Haunted Heart,” a single that’s already landed on modern rock stations and Gossip Girl telling a story of love from beyond the grave.

As for how all of this sounds onstage, you might want to ask the fans who've been floored by Little Hurricane's dirty blues sets in the past year, from dust-kicking festival crowds at Lollapalooza and Austin City Limits to more intimate, buzz-stirring residencies in San Francisco, Los Angeles and Santa Cruz. That's when the band's raw power truly kicks in—when you're in their sights and they've got every last amp cranked alongside shabby thrift store finds and moody lights.

"By the end of our set the 'home' we've created on stage is literally wrecked," CC and

Tone explain, "with both of us dripping in sweat and looking like a hot mess. It's more rock 'n' roll than the record. With all the rattling that comes from our homemade speaker cabinets, you really feel the dirtiness live. We give it all we've got, and we never hold anything back."
Posted by Rosemary Bystrak at Thursday, March 22, 2012