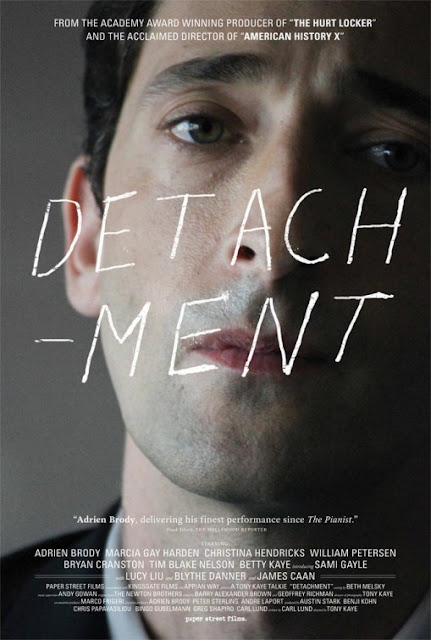 If you pay attention to my site, you know a lot (read: too much) about me. You know that I go to shows almost every night of the week. I love live music and occasionally deviate to go to a play, the opera, or on occasion, sometimes I actually stay in. Film is something different entirely, and though I have expanded cable and HBO, I see fewer movies than most of my peers. In fact, after two years without going to the movies, it was only recently that I started going again. I don't have Netflix and I only recently started renting from Redbox. It isn't that I don't enjoy good movies, it just seems the good ones are so few and far between that I have a hard time devoting two hours with a medium where I am not interactive at all. I can't sit still without wanting to look at my Twitter feed or surf the web or explore Facebook

I've made a greater effort to keep up with movies of late, and recently I dug The Girl With The Dragon Tattoo, Young Adult,  and Like Crazy. Still, none of these left me feeling  quite as affected as I did when I watched a screener of Detachment.


Director Tony Kaye’s (AMERICAN HISTORY X) long-awaited film DETACHMENT stars Academy Award® winner Adrien Brody as Henry Barthes, a substitute teacher who conveniently avoids any emotional connections by never staying anywhere long enough to form a bond with either his students or colleagues. A lost soul grappling with a troubled past, Henry finds himself at a public school where an apathetic student body has created a frustrated, burned-out administration. Inadvertently becoming a role model to his students, while also bonding with a runaway teen who is just as lost as he is, Henry finds that he’s not alone in a life and death struggle to find beauty in a seemingly vicious and loveless world.

This is not a film about the underdog school turning things around, nor does it offer a fix for failing educational policies or how to save these really fucked up teens. As Mr. Barthes, Brody (as sexy as ever, even when he's not supposed to be) gives an intense performance of a man with demons of his own while constantly being confronted by the demons of everyone in the world around him. Still there's some feeling of connectedness in realizing that everyone around us is as damaged as we are. Misery loves company.  He finds connection in the least likely of people and though there's certainly not a triumphant feel good moment in the film, the grit of it makes the analytical documentary style interview moments interspersed in the film feel all the more real and authentic. I'll also note that while the film sticks to crisp dialogue, the one song used in the film is "Empty" by Ray LaMontagne which feels like it was made for this film. (see it in the alternate trailer after the jump)

The film is available in limited release in theaters in select cities. In San Diego, the film opened on March 30 at the Reading Cinemas Gaslamp 15 and is also available through video on demand.