SXSW- Thursday Pt II or Sometimes You Have To Fake It 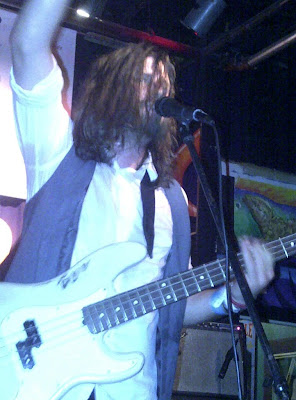 So if you ever believe that electricity is hard to come by, just try to find a spare outlet to charge your phone in Austin during SXSW.

Last night I left off at the Sahara, so that's where I'll pick up. The Heavy Guilt left the Sahara, but I stayed to catch A Scribe Amidst The Lions and to catch up with Ryan Blue and Chad Deal (of The Reader). When the show finished, we lingered about, taking full advantage of the ridiculously cheap drinks and backyard vibe of Sahara. Eventually we all got our shit together and went to Scribe's hotel. What was supposed to be a dropby ended up being a full three beer hang, until they motivated to get to their next showcase. (more after the jump) 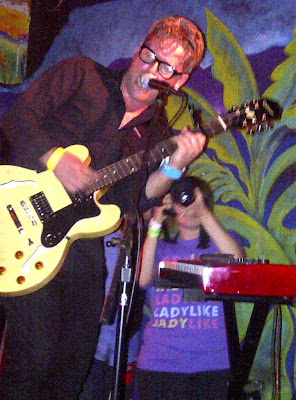 I navigated the van back toward their showcase and jumped off at 6th as they proceeded onto 4th or 3rd or wherever they were playing. I was meandering up 6th when I ran into Chad from The Silent Comedy. Without any obligations, we grabbed a beer at Bayou and he told me he had an extra (broken) all access wristband for Stubbs. We made nice with the bartender who found us some masking tape. We met up with the rest of The Silent Comedy and the Joelsons, made our way to Stubbs, and Chad distracted the door guy from feeling up my taped up bracelet. 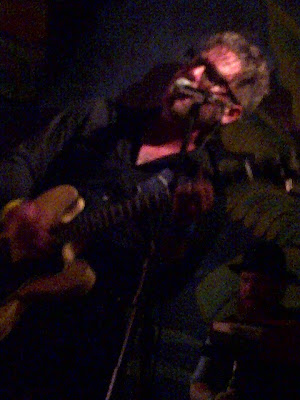 We were able to manuever through a back corridor to see all of Saint Motel's set. While there, the guys from Transfer showed up and then we got into it real good. Shots, beers, drinks...until we all made our way a couple blocks to Velveeta where TSC had a 1:30 set. It was looking grim as far as a crowd was concerned, but once they hit the stage, the room filled up and it was one of the best sets I've seen the band play, mostly because Josh had the freedom to jump into the crowd and annoint the n00bs. I filmed most of the set, so I'll share the video when I'm back home.

Italian Japanese were present and kindly gave me a ride back to the house, saving me about $30 and 2 hours had I taken a cab.
It is officially Saturday and I have so much radness to share about Friday, but I really need to sleep, so I'll have to catch up later, or you can just check my tweets from the last 24 hours and catch a glimpse. Until tomorrow (today), love to you all.
Posted by Rosemary Bystrak at Saturday, March 17, 2012

Email ThisBlogThis!Share to TwitterShare to FacebookShare to Pinterest
Labels: a scribe amidst the lions, italian japanese, sxsw, the heavy guilt, the silent comedy