A week has passed since my return from South By Southwest and I feel like I still have so much to talk about, but then last week I saw this snarky post on Facebook that said something like, "Has anything ever happened at SXSW in twenty years that anyone who wasn't there actually cared about?"  Well, Sir, probably not,  but if you think about it in those terms, why bother chronicling anything ever? Why even have a Facebook account if what happens to other people is so boring and inconsequential to your life? I'm not trying to save the world here, just living my little life and writing about it. So here goes. After the jump... 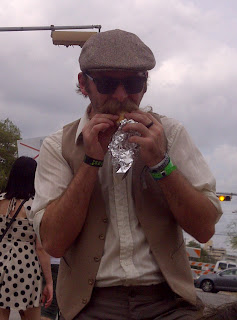 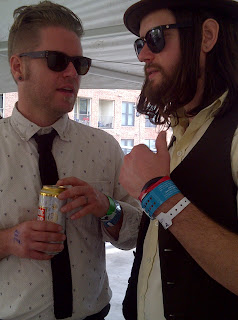 On Saturday, my final day at SXSW, The Heavy Guilt all got up relatively early as they decided to pound the pavement for one final day of busking. Intent on getting a couple more shows under my belt, they left me somewhere near Red River and 8th so I could try to catch the Mog party where The Silent Comedy was playing on a bill that included The Roots and Bob Mould as headliners. When I arrived, I saw a line of about 200-300 people waiting to get in. It wasn't looking good. I quickly searched  through my email to find the party invite. Since sddialedin.com is a part of the Mog network (those banner ads at the top of the page are fed through their system, which is why I had an LMFAO banner  for a while), I had a VIP invite and found a side entrance and breezed right in. Unfortunately, by the time I was in, The Silent Comedy had just wrapped up their set, but there was a separate patio on the upstairs of the Mohawk where we were entitled to free beer and an obstructed view of the stage below. The venue was pretty awesome itself. It was an outdoor stage with some floor standing area and then various leveled patio decks that ran around the stage. We mostly stayed protected in the VIP area because it was incredibly crowded in any other area of the venue. While there, The War On Drugs, Gary Clark Jr., and Blitzen Trapper performed.  After we were Lone Starred, we all decided to get street dogs. Watching Justin eat with that moustache is pretty hilarious, I might add.

While we powered down our sausages, this street comedian came up to tell us jokes. Then he claimed he was Rob Schneider's brother. Compare the two pics (me and Rob at the Casbah a couple years ago) and I believe him. 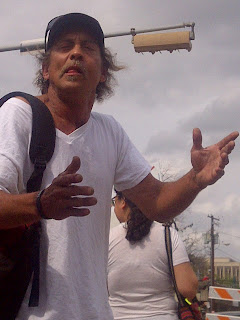 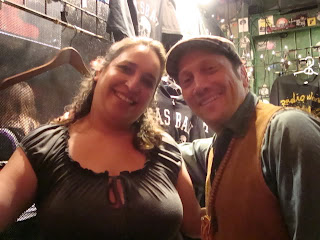 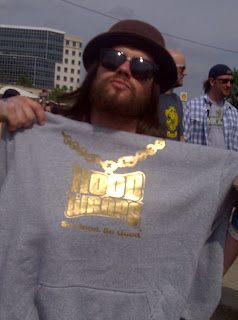 While sitting on the curb, the rest of the guys returned and Josh had scored this hoodie on the street, possibly the best street swag ever and if you watched the video I posted over the weekend, you will probably agree. Anyway, I parted ways with The Silent Comedy crew and made my way to 6th to search for The Heavy Guilt. I hadn't been a part of their busking efforts, but for the last day, I wanted to shoot some photos and video and help get out the final CDs that we brought with us. Throughout the week, they had been hit up by the cops several times because you're not allowed to have amplified music on the street. The cops were more or less cool about it and the band would relocate or shut down until it was  clear for them to play up again. It was pretty funny, however, that at the last set on the last day, the cops came and shut them down for good. 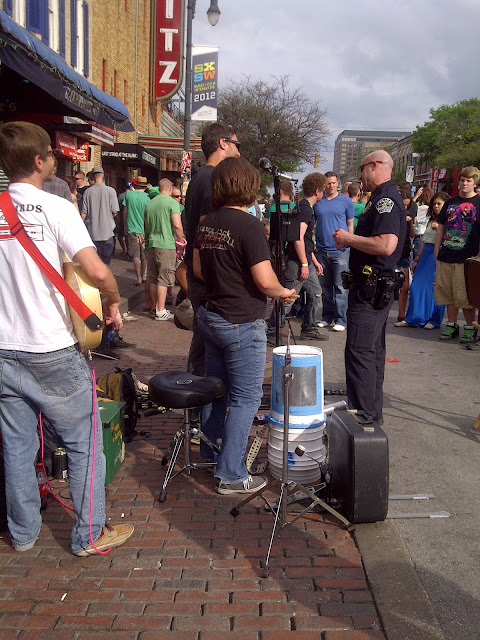 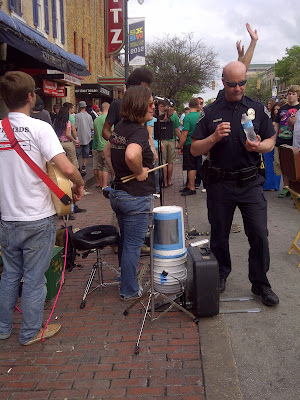 To be fair, while photos of cops busting up a good time probably give The Heavy Guilt a ton of street cred ( reinforced from the facebook comments when I posted last week), the police in Austin were pretty lenient and the band was never actually given any citations. Good thing they didn't see Jenny's brown bag of Four Loko.

Anyway, after some reprieve of just sitting and watching the crowds as Al went to retrieve his bike and grab some food, I wandered to a nearby bar for what would be my last beer and shot as I chatted with some guys originally from LA who really had no idea what SXSW was all about- they were just out to celebrate St. Patrick's Day. Funny that this massive takeover of Austin occurs and though it is huge to music fans, it's like how Comic-con happens here and the rest of the city is oblivious or doesn't care. Eventually we packed up the gear wagon and headed to the van.

Now let me rewind a little bit. When I caught the bus on Friday morning, I met a man from Austin who was going to meet his wife downtown. They lived in the suburbs of Austin, but had an apartment at their disposal for the weekend which was near the house where we stayed. He was the one I said acted as my tour guide, telling me about the famous shooting at the University of Texas at Austin in 1966. (Check out the wiki on Charles Whitman and the Main Building) As the bus passed through the University campus, I pointed out the stage where the Big Easy Express screening and concert with Old Crow Medicine Show, Mumford and Sons, and Edward Sharpe and the Magnetic Zeros was going to take place. This alerted the bus driver and he said they'd probably have to reroute the bus lines. Damn me and my big mouth. I had received this press release about the show, hosted by MySpace, at the University, and somehow was granted a photo pass to the event. The truth is that when I read about the event, my first thought was that his would be a great opportunity for The Heavy Guilt to busk to a captive audience of people waiting in line for hours before the gates opened.

Unfortunately, we stayed on 6th longer than planned and gates would be letting in soon, so we stopped at a strip mall for a pit stop and to grab some quick food and drove to the parking lot. The foursome assembled and performed as I passed out free four-song demos to anybody who wanted them. They lasted about an hour before The Heavy Guilt turned in for the night to clean the house where we stayed and to pack for our early departure. I'm glad they were understanding for the one event the entire week where I actually had a legit photo pass.

If you recall, last year Old Crow, Mumford, and Edward Sharpe joined forces for a train tour from San Francisco to New Orleans, hitting a handful of stops along the way, including San Pedro, Arizona, and Austin. Big Easy Express is the documentary for that tour.  As I mentioned, MySpace sponsored the event which kicked off with the screening of the film followed by a concert by all three bands. 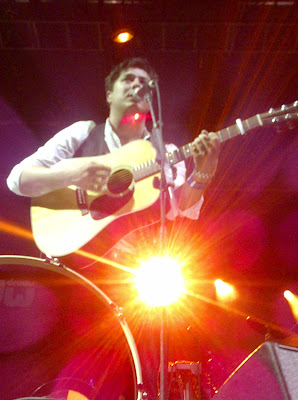 I have a few things to say about the experience. First, I don't think I've shot a concert that massive since Street Scene. I mean, I get to shoot at some station events like 94/9's Hootenanny and Indie Jam, but this event had 8,000 people, was shown live as it happened on MySpace, and I was in the photo pit with  photographers from all over, including Rolling Stone, The New York Times, Spin, and other prominent bylines. On that same token, however, I don't take well to bullying in a photo pit. I was knocked in the head and pushed by some broad who thought her shot was more important than anyone else's and there were two little girls talking shit about my camera behind me throughout the show. I'm sure it's nice if mommy and daddy buy you a $2000 camera, but someone somewhere believed that I had the same right to be in that photo pit and I for damn sure held my ground when I needed to. Here are just a few of the shots from that night. Just to irritate them a little, I pulled out my Blackberry and started shooting (photo on the left). The rest are from my Sony Cybershot point and shoot camera. Boo-yah.

After the three songs, I went to the back of the field (of course finding an outlet to charge my dying phone) before heading back up for Mumford and Sons. It became one of those situations where the security wouldn't let us in without the escort, and the escort thought she'd explained to the security that we could enter before the next set. As the band came out, we basically had to push into the photo area. I have to say it was a little hard to shoot because I love these guys and was in total awe just like the rest of the fans. Throughout their set, they dropped a lot of new songs, which makes me think we'll see a new full-length record sometime this summer. After three songs, I went back to my quiet spot in the field to watch the rest of the show. In the documentary, "the Mumfords" performed The Cave with the Austin High marching band, so they pulled the entire marching band onstage at the end of the show. Unfortunately, Marcus instructed the band to "play us out" at which time the majority of the crowd took that as a cue that the concert was over. Since we had never been given set times, I thought perhaps it was Old Crow who performed before the film and left, only to walk to my rerouted bus stop and hear them playing "Wagon Wheel".  I spent the next hour wandering and trying to find a bus stop and the bus was really late, but I finally navigated home by around 12:30, took a long shower and made myself ready to bolt first thing in the morning. When my head hit the pillow, the reality that the beautiful chaos of SXSW had come to an end for me.  I hope I get to do it all over again next year.
Posted by Rosemary Bystrak at Monday, March 26, 2012