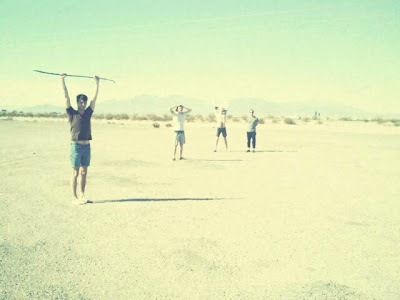 Last week, I posted a link to Jackson Milgaten's blog recap of his SXSW experience, but he also took some road time to answer my little recap questions. It is unfortunate that I didn't bump into these guys the entire time I was in Texas, but they were certainly busy and quite the buzzed about band, not just at SXSW but among bloggers in general who are catching on to the sounds that we've watched grow and morph throughout their musical careers here in San Diego. Check out a few videos from their set at the Virgin Mobile house at the end of the post. Jackson also wanted me to share this link from BreakThruRadio, featuring a podcast highlighting music from San Diego.

How long were you in Austin (from when to when)? Did you drive or fly? Any travel stories you'd like to share?
We (Cuckoo Chaos) got into Austin on Tuesday night and left Sunday afternoon. We drove out there and played a few shows on the way down with our friends Treasure Mammal who are from Phoenix. The shows were a lot of fun and served as a great warm up for south by.

Did you play? If so, when and where? How were your crowds? The venues?
We had 12 shows scheduled that completely ran the gamut ranging from an official showcase, to corporate parties, house shows, BBQs, and small clubs. Most of them were great and a couple were kind of weird (we played at the 508 house to the sound and video crew while there was a line of people that wrapped around the venue who weren't being allowed entrance for some unknown reason), but overall we had a blast. 4 of the shows were cancelled and we ended up picking one making for a grand total of 9.

Any memorable or standout moments from your own shows?
My favorite was probably the last one we played which was at a house a few blocks north of downtown. We stole a bottle of vodka from an earlier show we played that day and passed it around the party during our set. Scott stood in the middle of the audience facing the rest of the band. We really let loose at that one.

Did you catch any parties or showcases of note?
We saw/played with some great acts. Of note were Deerhoof (San Francisco),Zulu Winter (London), Thee Oh Sees (San Francisco), Kindness (London), and 100 Flowers (Austin). There were a lot more we wanted to see but we were so busy it just didn't work out.

Will you go back as a band or fan in 2013?
I'm sure we will go back again next year if our schedule permits. It's so much fun to be in the madness of it all and to be able to see our friends from all over the globe. I would highly recommend it to any lover of live music.