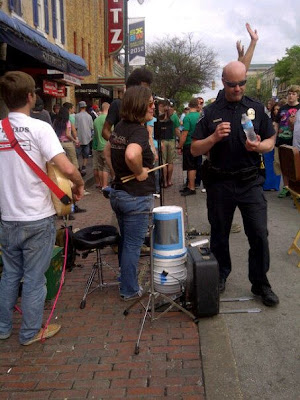 I traveled to Austin with The Heavy Guilt, but they spent the majority of their days and nights busking while I had some SoundDiego/Casbah/sddialedin things I had to do, so I still asked the band to share their afterthoughts. This is from Sean Martin, guitarist of The Heavy Guilt. They will be performing tonight at the Casbah in the Atari Lounge. If you went to Texas and didn't hear from me, feel free to answer the questions and shoot'em over to me for posting.

We drove. Too many stories. Al and Rosey were beside me the whole time and write more eloquent than me, but...

I noticed the sky a lot during my travels. San Diego has some plush atmosphere, so it was quite obvious I was not at home. The fiery nature and general bigness of a Texan sky definitely reinforces the vast 'big' sterotype to be true at it's source. Pretty awesome.
The cats in Transfer captured its essence best.
Arizona also presented venus, jupiter & the moon at eye level around 4 am, Wednesday morning. 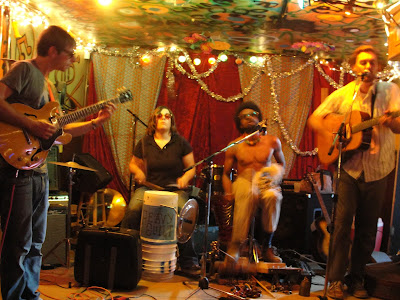 Did you play? If so, when and where?

A primal & mobile incarnation of the Heavy Guilt hit The Sahara Lounge, The Whole Foods Tent
& about a dozen guerilla sets in the streets of Austin. Primarily on 6th St.

Multiple feelings of exhilaration and exhaustion. The final time we were shut down by the fuzz on Saturday was kinda epic. The police Austin were pretty flexible and seemed to get a kick out of slapping our wrists, tongue in cheek. 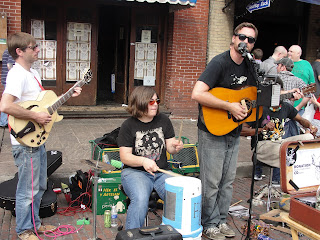 I caught a full on shred metal band roguing on the cobblestone.
I applauded their approach synonymous to The Guilt, as I housed several breakfast tacos from The Flaming Cantina. Sad I missed the Heartless Bastards. Guess I'll spot them at the Belly Up next month. Erikka Wennerstom's guitar playing influenced my playing before I went into the studio last year.

Radiohead is awesome. Along with the Immortal Technique and Austin BBQ.
Al Howard really is a shaman.
We are spoiled in San Diego. Any fluctuation in weather is rats on my tools for playing music.
I broke 6 strings and all of my fingernails.
It was great to see other San Diego bands hustlin hard. Little Hurricane threw down and turned some heads.
Lesson 1 stay hydrated and breathe.
Lesson 2 learn lesson 1 & the rest fall in place.

On our drive back from Texas, we hit massive dust storms, heavy wind, and a crazy snowstorm when we hit Pine Valley that we learned shut down the highway just a couple hours after we passed through it. This is some of that footage taken from the back bench that I shared with Sean (best to watch in HD).