I got home so late on Thursday that The Heavy Guilt were all home and more or less in bed when I returned. The next morning, I awoke to everyone getting ready, closed my eyes for one more snooze and woke up over an hour later to an empty house. I probably needed the sleep.

When I finally got myself ready for the day, I navigated to a nearby bustop about a mile from the house. I am so glad I learned the transit system because I probably saved $200 from last year on cabs alone. While at the busstop, I met an older gentleman from Austin who was bussing to meet his wife downtown to partake in the SouthBy fun. It made for a fun busride as he and the driver pointed out Austin landmarks and architecture. Things like "the owl building". The driver said there is a building with the same rooftop design in every capitol city in the US. They also said this specific building was the most expensive per square foot in all of the history of Texas. An Aussie girl chimed in that the rumor is that the architect was from Rice, so when you look at it cockeyed, the owl looks right at the University of Texas at Austin. I'll have to factcheck all of that when I get home. They also pointed out the tower famous for a shooting in the 60s. Gonna have to look that one up, too. In return, I alerted them to the Mumford & Sons, Edward Sharpe and the Magnetic Zeros, and Old Crow Medicine Show movie screening and concert as we past the LBJ lawn at the UT. This figures into my weekend, but I'll get to that later. (more after the  jump) 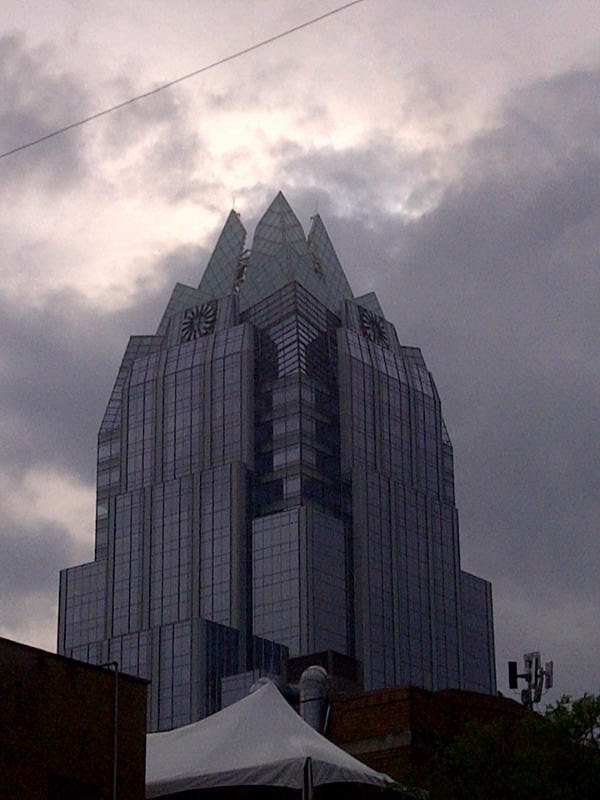 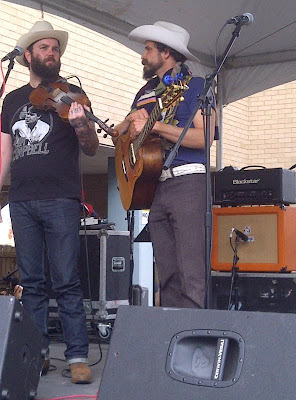 I thanked them all for their educational ride and transferred to a bus to the south side of the river to S. Congress. It's such a cool part of the city, I wish I had more time to explore the shops, bars, and eateries, but I was heading to a ticket at the Frontgate offices. I ran into Grampa Drew and Allison along with Brian Spevak so we enjoyed the free tacos and beverages while J Roddy performed. When they left, I stuck around to see Jonny Corndawg and to meet Jeff from Frontgate. Their company runs the ticketing for The Casbah and the Belly Up among others and he and I will be talking soon about some new stuff that will make buying Casbah tickets even easier. I'm really looking forward to sharing that with all of you when we launch. 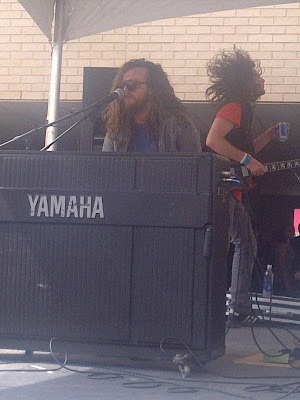 As much as I wanted to see Lucero, I was trying to meet up with The Heavy Guilt. Even then, I didn't find them, but I wandered and found a bar called Six that had free oysters and really clean bathrooms, so I hung there for a bit, bumped into A Scribe Amidst The Lions for a few minutes, popped into a gallery that let me charge my phone until I met Tim Pyles at Imperia, a sushi restaurant where our friends from U.N.C.L.E. were hosting a cocktail party. It was filled with radio people, music supervisors, and a few label people, so there were some familiar faces of people I've met over the years at Sunset Sessions. We relaxed a while and chatted with Hargo. That ended at 6 and Pyles couldn't get me into a dinner with Columbia Records, so I wandered the streets for awhile, mostly taking in the sights and street noise of bars pouring with music.

I made my way to Elysium for a quick beer and to make contact with everyone else. Al Howard was headed my way to retrieve his bike so I finally ate while I waited for him, we sat at the Whole Foods garden while he ate, then parted again.
I made my way to The Stage on 6th. Third Man Records was hosting a showcase and Jack White was scheduled to perform. It was a badge only event with a crazy line and a little after 9, I'd all but given up, when Pyles told me to meet him and all the people from the Columbia dinner. Some miracle got us both in through slight manipulation. Unfortunately there were signs that patrons would be escorted out for taking photos. Unfortunately, I realized too late that the rule only applied to Jack White and not the other bands. (You can see photos at JackWhiteIII.com) It was pretty great to be there and I found a corner to rest in a James Mercer and his girlfriend hung out about 4 feet away. I'll have to refer back to the schedule to recall all of the openers that played between two stages.

I found an outlet in the main room which was in the far back corner but had a step and rail where I ended up posting up for the rest of the night. That corner proved to be great for the show and for people watching. We talked to Tim Armstrong for a while, mat Jason Sedankis from SNL, and Bill Murray was just a few feet in front of me for both of Jack White's sets.

Let's talk Jack White for a second. I think I've see each of his various projects at least once a piece, but imagine a square, level floored room about twice the width of the Belly Up with the stage in the corner so just about anywhere was a perfect sightline. Then imagine Jack White backed by five musicians: violin, standup bass, keys, drums, and backup vox. The first band was all female, the second all male. Then imagine the band performing all the hits from all of his projects and mixing it up with new stuff and as you can imagine, the crowd was ecstatic and definitely witnessing something special.

Between sets I chatted with Phil from Redlight, who manages Other Lives. It was so nice to hear how great they're doing and fun to hear some behind-the-scenes Radiohead stories. Other Lives are heading to Europe as I type and playing a sold out tour before returning for more Radiohead dates. They'll also be dropping a new EP in the next few months so keep an eye out. Phil bought me a shot and a beer and returned to Pyles who was chatting with Cory Chisel. Man, I love that guy. The music started so I returned to my corner spot.

Bill Murray was still in front of me and Pyles and made his way to the bar. The girl bartender was so excited and poured shots of Fireball for his group. Toward the end of the show, Pyles wanted to say hi and shook his hand. I leaned into his ear and asked, "Did I see you do a shot of Fireball?" He leaned in close and put his arm around my back and with his open palm on my ass, smiled and leaned into my ear, "Only one." Not exactly an epic conversation, but that's really all I've got. I should also note, it wasn't pervy or anything creepy, I tend to be an ass grabber myself, it was more like a soft butt cupping, like the way you put your hand on the small of someone's back as you lean in to talk in their ear.

John C Reilly had performed, so I got a pic with him, and we met this guy Lawrence who works with Do512, an amazing Austin music blog. One day I hope sddialedin.com is even half as cool as what they're doing.
Anyway, the bar was closing, so Pyles and I said our goodbyes and hoofed back to a vehicle he was borrowing that was across town. He safely dropped me off and was on his way.
(p.s.- It is Sunday and haven't had access to a computer with wi-fi since Thursday. At the moment, we're on the 10 west somewhere in New Mexico. I will have plenty of photos and videos to share, but for now, here are just a couple shots from my mobile. I did a better job on Saturday.)
Posted by Rosemary Bystrak at Sunday, March 18, 2012