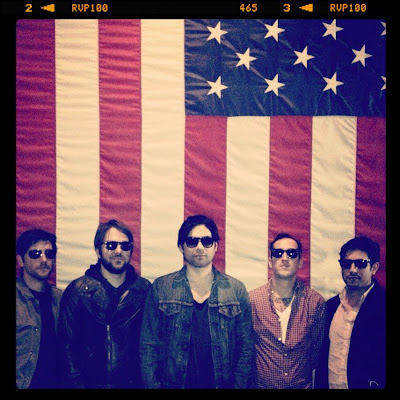 Though Italian Japanese had a short stay in Austin, I ran into the band on Thursday night at the Velveeta Room, where The Silent Comedy played a 1:30 am set. After the show, they were all kind enough to give me a ride back to the house where I was staying, saving me cab money and who knows how much  time just trying to catch one. This is the post SXSW survey as answered by the band's manager.

How long were you in Austin?
Wednesday March 14th through Thursday March 15th.

Did you drive or fly? Any travel stories you'd like to share?
We've been on tour for two weeks, and SXSW was part of the tour.

We randomly ran into Transfer and The Silent Comedy after playing the City Tavern in Dallas, and closed the bar down. Transfer was playing a show a couple blocks away the same night, and The Silent Comedy came out to support. Afterwards they headed to the venue we were playing out to have drinks. We ended up having a blast with our San Diego crew.

Did you play? If so, when and where?
Yes, we played four showcases. Wednesday night we played The Thirsty Nickel at 9:30pm. Thursday we played Cheer Up Charlie's at 3:30pm, Blind Pig at 7pm, and Wahoo's at 11pm.

How were your crowds? The venues?
Wahoo's was a huge surprise for us. Ended up being the most energetic crowd. The Thirsty Nickel and Blind Pig were great. Cheer Up Charlie's had an awesome main stage with amazing sound.

Any memorable or standout moments from your own shows?
Yes, for our Thirsty Nickel show, our friends from the Chain Gang of 1974 came out. For Cheer Up Charlie's it was awesome playing with Saint Motel, Dirty Beaches, and our friends from Mrs. Magician. The Cuckoo Chaos boys came to support us as well.

Did you catch any parties or showcases of note?
We caught our friends Cults at the Carson Daly Last Call showcase, which was sweet.
Writer at Shangri-la was awesome.
The Silent Comedy at The Velveeta Room was off the hook!
Saint Motel, The Chain Gang of 1974, & Paper Route were also an amazing line-up at Peckerheads.
We also caught Snoop Dogg at the Doritos Party.