SXSW Experience: A Scribe Amidst The Lions

The Heavy Guilt left San Diego around 6pm on Tuesday and I was along for the ride. We stopped in Las Cruces, checking into a hotel at 6am to noon to get some sleep before resuming the trip to Austin. While on the road, I began to get texts from Ryan Blue, asking if I wanted to help book/sponsor/promote a showcase at a bar called the Sahara Lounge. He already had A Scribe Amidst The Lions and their friends Sour Soul from Mexico City. As we texted back and forth, I got the Heavy Guilt to agree to play, as well as Dead Feather Moon. Unfortunately, by the time the lineup was settled, we were arriving in Austin and my 2 am promotional efforts were pointless. The bands were all awesome, the food was amazing, and the drink specials meant a whole bunch of buzzed musicians on the cheap. After the show, I went with A Scribe Amidst The Lions to stop in at their hotel before they took off to their next gig and I returned to wander 6th Street. I asked them the same questions I asked everyone else about their trip. This is from Kris Towne. You can see A Scribe Amidst The Lions as they headline tonight at the Casbah with Family Wagon, Children of Nova, and members of The Heavy Guilt performing between sets in the Atari Lounge. 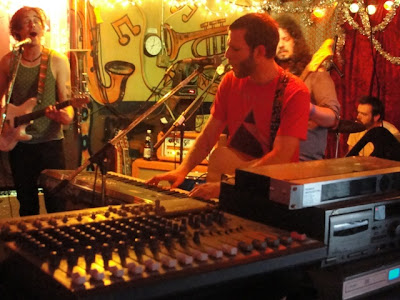 How long were you in Austin (from when to when)?

*Oh boy did we drive.... what a trip. Multiple times driving through the night. I even videotaped the sun rising over the mountains one morning [not the safest thing!], but it's gonna make for a great time-lapse portion of our documentary. But holding that camera in place for an hour and 20 minutes left me with one helluva sore arm and shoulder the next day! Also, Bob did a great job changing his shoes and socks and kept our sense of smell from being destroyed. Outside of El Paso we were pulled over for having a license plate light out, and had a very interesting conversation with the sheriff regarding our "ridiculously liberal" laws on marijuana... while we didn't have anything on us, we had to verbally tip-toe to avoid him tearing our van and gear apart in search of something. 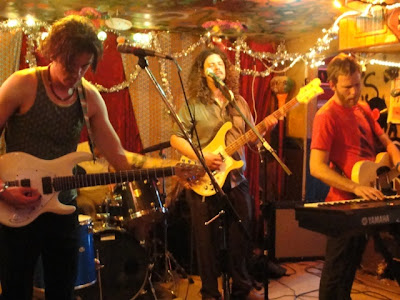 Did you play? If so, when and where?

*We had four shows booked, one of which was cancelled due to sound/technical problems [aka bullshit]. Venues were Cedar Street Courtyard [Wed 3/14 day party], Sahara Lounge [Thur 3/15 day party], Burger Lounge [Thur 3/15 night showcase]. We also played two shows in San Antonio, and two shows in El Paso. These were actually much better than all our Austin showcases. One of the El Paso shows was an outdoor Bloc Party with Raekwon [Wu Tang Clan] and Cults headlining!


How were your crowds? The venues?


*Venues were amazing, crowds were minimal. Our best turnout was maybe 50 people at the nighttime Burger Lounge show [which is really a restaurant not a venue]. It was cool because we had to play at a minimal sound level to keep the owner happy. Other bands had been shut down all day for noise violations, but we handled it with style and the sound guy and owner were extremely happy, and impressed. We were the first band all day to make it through our entire set without even one warning. The crowd really dug it and we did a lot in merch that night. Plus it's always an invigorating challenge to play a toned-down set without rehearsing it. I really think that helps you grow and expand as a musician.

*We got to sneak in to the Thee Oh Sees show, which was packed and a lot of fun!!

*We'll see.... I feel like unless we get some really killer night time parties/sets, it's not really worth the trip. I am working out another tour to Austin right now that's not during SXSW so we can actually get paid and hopefully really make an impact in TX. Through this tour we got great connections in San Antonio, El Paso, and Austin and I would like to keep those flourishing.

*Apparently, during SXSW you can smoke, drink, and eat in the pool and hot tub area with lots of people until 5 or 6 am and no one says shit. We did this multiple times while in Austin. Oh, and I saw the singer from Counting Crows. Adam something or other. I didn't say anything to him though because, well, I have nothing to say to him.
Posted by Rosemary Bystrak at Thursday, March 22, 2012

Email ThisBlogThis!Share to TwitterShare to FacebookShare to Pinterest
Labels: a scribe amidst the lions, casbah, sxsw