I caught up with a few way overdue posts yesterday, but I quickly realized that part of the reason I haven't been writing is because I have been so incredibly busy, and when I have room to breathe, I have actually been giving myself time away from the computer. That said, I'll pick up where I left off at the end of February. If you care to read my diary, click 'keep on reading'. 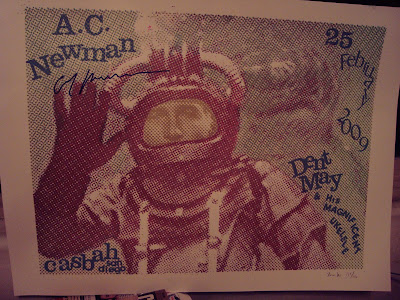 I sold merch for AC Newman and Dent May, so I didn't really get to see the show, but Dent May is this amazing band with a eukele as the centerpiece. I was a little surprised the show wasn't sold out, especially since there was such demand for Neko Case tickets just a week later, but there were plenty of people who told me that A.C. Newman's first album, A Slow Wonder changed their lives. Carl was kind enough to sign a tour poster for me at the end of the night.

The show ended quite early because the band was playing on KEXP the next morning and had to be up by 4 a.m., so this gave me time to hit the Soda Bar where I ran into friends on Kipper's Karaoke Night. They tried to get me to sing, but as I've said before, it is NEVER going to happen, so instead I played pool with a guy who lives around the corner from the bar and asked if I was a student at SDSU. Considering I graduated college in 1998, I have to say I was more than flattered. The bar was a bit slow so they closed down a little early and I was on my way to prepare for another day.

The next night I made my way downtown with a Jonathan and Xavie to see Kinky. I had won 10 tickets from Kinky and thought I'd take my best friends who both had upcoming birthdays, but they couldn't make it after all, so I hooked up some friends with tickets. When we arrived, the line was crazy and the first band hadn't started, so we decided to hit up The Local. On Thursday nights they have $3 pints and other great drink specials, so we stayed there for quite some time, bumping into a few of my friends who were on a pub crawl. When we finally left to the show, Kinky was about to take the stage. I smuggled my camera in, as did half the audience, but could never really get close enough to the stage for any real results, so this is the best I got, and actually the photo on the left was taken from the balcony when we were getting drinks. It's funny that I get press releases so frequently from the band's publicity agency but they couldn't hook up a photo pass or tickets for the actual show. I don't hold it against the band at all and they gave a stellar performance and it seems to me that of all the shows I go to, the rock en espanol crowds are by far the most frenzied and enthusiastic at shows, perhaps because they don't happen very often.

After the show, we made our way to see N.A.S.A., a DJ duo, at the Casbah. It was fun and the crowd was in full dance party mode, but personally I just don't get the whole DJ thing. I felt like I was at Mr. Crown's or Safari in Tijuana back in 1993, which is all good and fun, but I guess I'm just always gonna be someone who prefers to see live bands. Maybe I should look into ecstasy?

Because I was going to be on a music panel on Saturday, I opted to steer clear of any drinks on this night, which was a damn shame because all my favorite people were there and everyone was having a blast. Joel P West started off the night and where my photos as Whistle Stop generally suck, now that my camera is failing and making everyone purple, you can really see why I didn't really bother with photos that night:

Still, Joel told me he's taking some time to work on new songs and hopefully start recording a new album so I'm looking forward to that. He's a high school teacher so I guess spring break gave him some time to play shows including this one, one at Soda Bar, and another at TNT, all in the span of a week. His songs simultaneously make me happy and sad inside and his vocals backed by beautiful string arrangements make him an artist to watch.

To make it an extra special night, Writer and Swim Party were releasing their split 7" record and played together. Eli, Jaime, Andy, Petro, Alex, and Erik all played along, and even had Natalie on keys for a couple songs. For the most part they alternated between Swim Party and Writer songs that just made for this amazing superband that couldn't be drowned out by the beyond packed Whistle Stop.The $5 records can be purchased at either bands' shows.

I had been invited by San Diego Union-Tribune music critic George Varga to be on a panel for the National Association of College Newspapers convention that was held in San Diego. Once I got over the feeling of "what the hell am I even doing here", we actually had a great discussion about music journalism and it was cool to be on a panel with Bart Mendoza, Marc Balanky, Keli Dailey, and my blog partner-in-crime, Natalie Kardos. Natalie and I stayed after for a while and chatted with some students until we finally had to bail so she could dye her hair blue. I didn't have much time to do anything after because I had to be at Planet Rooth by 6 to get squared away for my night of being MC for Sight & Sound. I know it's a bit of an oddity for someone like me who hates being photographed or onstage to be at two events in the same day where I was on a mic, but it ended up being a really good time...at least once I was able to introduce the bands. There was a long wait between my arrival and the festivities beginning, so Natalie and I walked to Sicilian Thing and had some pizza before returning. I took to my hosting duties, but the actors and carnival people just kinda did their own thing, starting before I got through my intros, so who am I to argue with thespians or a carnival woman with a painted clown face?

There was a contortionist, a young acrobat on a Chinese pole, a duo who did a scene from a play, and then Joanie Mendenhall playing solo. And, as self depracating as she can be, she sounded great. She wanted me to introduce her as a "five time San Diego Award loser."

After Joanie the crowd moved outside, where I introduced a comedy/acrobatic group called the Platt Brothers who had this choreographed dance routine that was pretty funny. I was really happy to be able to introduce Swim Party, and later beatboxer Generic, who ended up joining forced with Jamuel Saxon. It was also cool because some of the students that were at the conference earlier in the day came to the event. (Although their advisors left after an awkward jaunt into The Rubber Rose. They explained that they were from a conservative Jewish school on the east coast and I felt bad for not even thinking about warning them.)

I hung out for a few minutes after the show but I wanted to catch Transfer at Ruby Room, too, so I said my goodbyes and headed over. I missed the show, walking in during the band's last song, but I at least got to wish Seth a happy birthday and chat with Matt and Sean for a bit. I think I might try and do an sddialedin.com show soon, and it will likely be at The Ruby Room, so I'll keep y'all posted.

After all that goodness, I took a couple days off from going out and actually wrote a bunch, catching up from the previous month. Yikes. I think I need a better time management system. I'll pick up this diary post in the next post...