So after playing the Singing Serpent show and watching Henry Clay People rock out in a crowded bar on 6th St. We heard that the Cold War Kids were playing somewhere by 1st St. across the river. I thought this will be great, I saw them when they played the Casbah, and a crowded bar is definitely a great way to see them, unfortunately after trekking across downtown Austin for what seemed like ages, we stumbled upon the large outdoor venue which was more like seeing them at Street Scene. We stayed through some of their set as we got lost in the sea of people, but we wanted to be at the bars, not a corporate-fest stage.
Trying to leave huge outdoor area was confusing and we almost ended up backstage, you could hear the security guard stutter his words as he asked us "Are you guys supposed to be back here?" We were definitely grungy enough to be in the Cold War Kids, but we left anyways to go see Rob Crow at the Singing Serpent showcase.
About 40 blocks later, we were back where we started at the Iron Gate, unfortunately Rob Crow was packing up, so we just chilled for a while drinking beers with my friend Riyadh and some of the SD crew there. 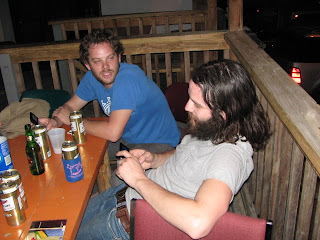 Eventually the bar turned into a Mexican dance hall with an age limit of 40 and up, so we headed over the Ms. Beas across the street for Indian Jewelry. There were so many kids there, you couldn't see the band (no stage). So we snuck around back, since there was opening in the gate. Indian Jewelry were really great, and had a lot of energy created by this rhythmic droning and some cool electronic grit to it. 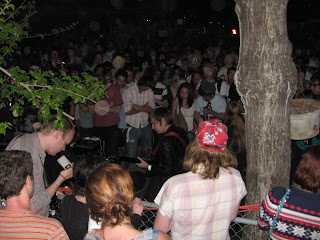 Click on Keep On Reading to get the whole story.

Next was Best Friends Forever on gazebo style stage. A three piece fronted by two females singing songs that are cleverly sarcastic, light-hearted, and empowering enough to make me feel that Adam was created from Eve's rib bone. Loved it, and a flute solo when you thought it couldn't get any better. 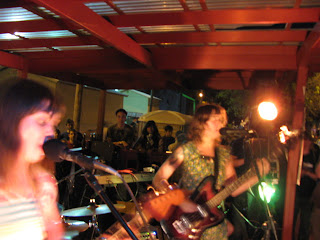 After Best Friends Forever finished, we decided to keep cruising. We really just started roaming randomly, no plan. Eventually we heard some rockin music going on and lights and people and free, so we stopped by. Just so happened to be the Obscure Magpie showcase, which Transfer was playing as we walked in. It was an medium sized outdoor venue with great stage backdrops. Transfer played on the main stage, with amazing lights in front and behind the stage. They rocked really hard and it was good seeing San Diego representing. 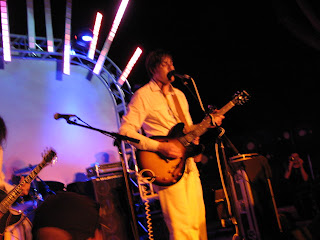 After Transfer was Apes of Wrath playing on the smaller stage which also had cool lighting, and these guys were going off as usual. I have a couple friends who ever time they see Apes they tell me "This is my new favorite band from San Diego." 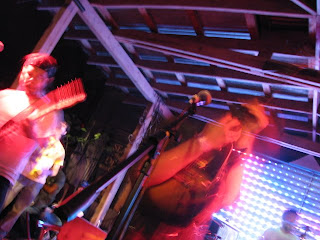 After supporting the San Diego bands at Obscure Magpie, we made our way back to Ms. Beas, mostly because that is where are car was parked and it was almost 2AM. This is when the coolest show happened. An acoustic showcase under a tree, featuring a bunch of the bands playing Ms. Beas. This was a truly communal and happy event, each artist got to play two songs and everyone was just hanging out like campfire style. The notable performances were Wavves, Best Friends Forever, Still Flyin, The Homosexuals, and Jana Hunter. I was lucky enough to get some footage of Wavves, who seems to be the new young star from San Diego, signed to Fat Possum Records. I wondered what it was going to sound like without all the fuzz. They were some cool songs.
The show ended at 4AM with a ceremonial burning of some random stuff and we had nowhere to stay. So like true bohemians, we set in for the night in Andy's Honda Element. Day 1 of SXSW was amazing to say the least and we couldn't wait for what was in store for day 2. More story to come later... 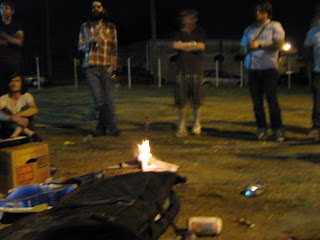 the homosexuals are playing tonight in san diego --- the soda bar --- a part time punks show with kill me tomorrow.