I am waking up and my stomach does not like me very much at all. El Paso was quite a trip. We pulled into town early and spent about 4 hours in Starbucks using the internet and just figuring everything out. Then we ate at this awesome bbq with our friends Lights On at a spot called the Rib Hut, it was a funny contrast because the two big groups eating were some broski's and us, but everyone had a good time. As we pulled up to the venue, a pleasant surprise as Drew Andrews pulls up in his van. They were playing the Black Market, which was literally across the street, good to see other SD bands on the road. Zeppelin's was bizarre at first as there was no one from the bar knew what was going on, but once the owner showed up all things were cool.

Around 10:45pm Lights On started, pretty much right when the bar started getting full, it's a pretty late scene over here. Plus it was St. Patty's day. Yak Ballz was playing upstairs so the vibe was way different in the upstairs hip-hop venue. Jayme walked into the bathroom as two huge hip-hoppers were taking down some powder. Luckily he didn't get jumped (p.s. that stall didn't have a door, or a toilet seat, NO Deuces)

Writer rocked a good set and since we got lots of drink tickets and the bartenders kept us filled, we were getting pretty wild. Every night the shows have been better, as David starts to really sync up with the brothers Ralph. The young kids from San Fran were Dizzy Balloon and they were amazing. They too are heading to SXSW and definitely Spinto Band style, so that's awesome. They ripped a great cover of "I Want You Back" everyone was bouncing around and dancing.

The night ended with a fight outside the club that shut down the street, and we got kind of weird at the end of the night, possibly letting out some inner tension, but we made up afterwards as we got late night Taco Cabana, and stayed with Andy and Jayme's aunt and uncle as we rolled in at 4am. They were very friendly and cooked us breakfast this morning. We are hung-over but happy. Now we are about to leave to Austin. Adios! til next time.

p.s. if anyone wants a maltese talk to Andy and Jayme's aunt. 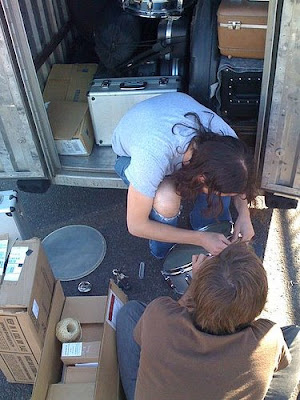 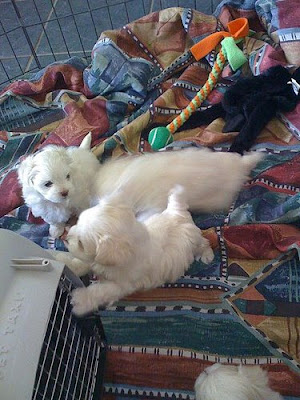 those puppies are so cute! i've actually never seen a maltese puppy! anyway, looks like your texas trip is quite the adventure. nice blog!